Last night The Wrap‘s Eric Kohn spoke to the makers of Catfish — Henry Joost and Ariel Schulman — and Ariel’s brother Nev Schulman, who basically “stars.” He ran into the trio at a Park City ice cream shop (presumably Java Cow), and in so doing asked about suspicions that their film may have been partially staged or fabricated. Their collective answer was “nope, not at all, no way” and “we can prove it.” 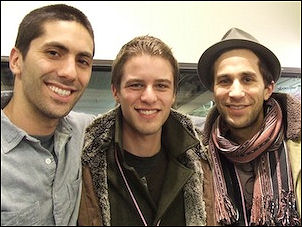 I have a problem with one aspect of Catfish that I didn’t mention during the festival. Before I mention this I should call it a SPOILER.

During the first 60% of Catfish Nev — a smart, confident and attractive 24 year old — falls into an intriguing online flirtation with a 20something lady who lives in Michigan. (Or so she says.) She has a pretty big honker but is otherwise thin and attractive. Their exchanges, as you might expect, become more and more emotional and sensual. Then they become explicitly sexual. And then suddenly things change.

Once this sinks in it’s quite clear that Nev is fairly glum — you could even say forlorn. And for me this didn’t quite calculate.

This seemed especially curious for a guy who’s clearly smart and good-looking and creative and whatnot, and living in a city like New York with all kinds of hook-up options. I could imagine Clem Kadiddlehopper falling for this. Or an overweight dweeby type with halitosis getting caught up in an online fantasy because he might not have much going on. But a guy like Nev…? Doesn’t figure.

During the chat Korn asks Nev if Catfish is a cautionary tale for people who use social networks. “For me, it’s really about vulnerability,” he answers. “I didn’t consider myself a vulnerable person before this happened to me, and now I have to reassess how I put myself into the world.”