I stay away from soft drinks as a rule except when I order Diet Coke at parties. The only time I’ll bring some home from Pavilions is when I happen to find supplies of Coca Cola Life — the reduced-calorie green label brand that I’ve told myself is somehow preferable to Diet Coke and certainly less toxic than Coke Zero. The other day I bought a six-pack of small glass bottles of Coca Cola Life. As I was unpacking the bags I put one into the freezer before drinking it 10 or 15 minutes later. Five or six hours later I opened the freezer door and of course the fucking bottle had exploded like a grenade. Gobs and gobs of honey-brown Coke snow splattered all over the inside, covering everything. It took too long to clean it up and it was sticky and messy to boot. It wasn’t a huge deal but on the other hand it was one more thing on top of everything else, and all because I couldn’t repress this thing I have about hanging on to Coca Cola (i.e., a metaphor for my childhood experience) in some fashion. 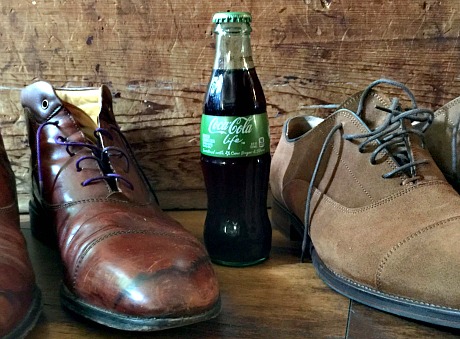