Last night I saw Mark Brecke‘s They Turned Our Desert Into Fire, an intelligent, impassioned, well-sculpted doc about the horrors of the Darfur genocide, which apparently will never be stopped by anyone because it’s not in their economic interest to do so. Pic was shown to a modest-sized crowd under the auspices of the Artivists Film Festival at the American Cinematheque’s Egyptian. 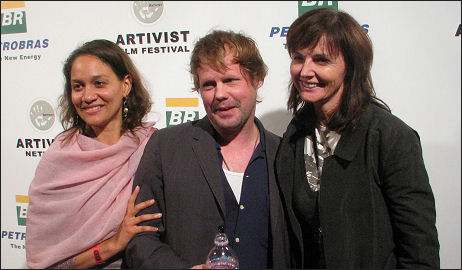 They Turned Our Desert Into Fire director Mark Brecke (center); his wife stands to his right; friend-supporter Svetlana Cvetko to his left.

How does it compare to Ted Braun‘s Darfur Now and Annie Sundberg and Ricki Stern‘s The Devil Came on Horseback? Favorably. Brecke, a war photographer, lays out the facts, the whys and the wherefores with clarity and fervor. It’s a rough film to watch here and there, but impossible to turn away from.
The following wasn’t included in the doc: (a) interview footage of Sudan president Omar Hassan Ahmad al-Bashir, who was alleged on 7.14.08 by the Chief Prosecutor of the International Criminal Court to bear criminal responsibility for genocide, crimes against humanity and war crimes committed since 2003 in Darfur; (b) a hard-hitting interview with rebel leaders and their feelings about the mass slaughter; (c) an interview with a representative of the Chinese government, which has financed the slaughter, in a sense, by being a principal purchaser of Khartoum’s oil without demanding humanitarian conditions; (d) an interview with a rep of the American news media, which has paid scant attention to the Darfur genocide since it began in 2003; and (e) a review of the Darfur-related events from late ’06 to mid ’08. 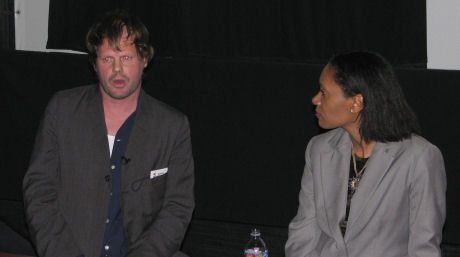