“Lee Marvin moved across the screen like a shark coming in for the kill,” Manohla Dargis has written in a 5.11 N.Y. Times appreciation for this late, great actor whose films are being honored with a retrospective series at Lincoln Center’s Walter Reade theatre. 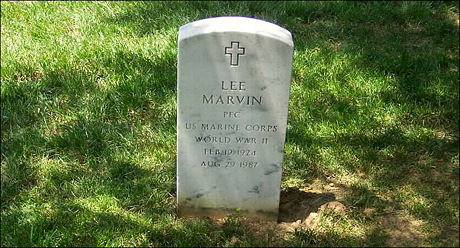 “Long and lean, with shoulders that looked as wide as his hips and hair as silver as a bullet, he seemed built for speed. He roamed across genres, excelling at gangsters and cowboys. Romance was not his thing. He could make you laugh, at times uneasily, but it’s his bad men that stick in your head. They are scary as hell, sometimes seductively so, because their every punch and twist of the knife seems delivered not in the heat of violence but in its chill.”
Not me. I’ve always admired Marvin’s brute masculine force, bit I’ve always preferred his good-guy variations — Walker in Point Blank (that’s right — Walker is a man of steely character and admirable fortitude in that film), the dry-mannered mercenary in The Professionals, the drunken gunfighter and his evil twin brother in Cat Ballou, the flinty Army officer in The Dirty Dozen, the washed-up athlete in Ship of Fools, the good hired-gun in Prime Cut, etc.
Marvin’s bad guys, by contrast, always seemed way too easy for a guy with that voice, those eyes, that size. His baddie-waddies in The Wild One, The Big Heat and The Man Who Shot Liberty Valance always brought out that Bob Dylan in me — i.e., “All right, I’ve had enough…what else can you show me?”