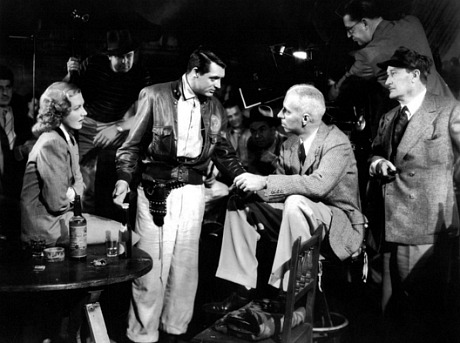 From “Taking Off,” posted on 8.8.11: “Emotional dialogue doesn’t have to be treacly or obvious. It’s fairly awful, in fact, when filmmakers have their characters say ‘this is who I really am and this is what I’ve always wanted,’ etc. I can’t think of a more sickening use of the gooey stuff than in the middle-school graduation scene in Crazy, Stupid, Love. And I can’t think of a better, less sentimental, polar-opposite case than Thomas Mitchell‘s death scene in Only Angels Have Wings. 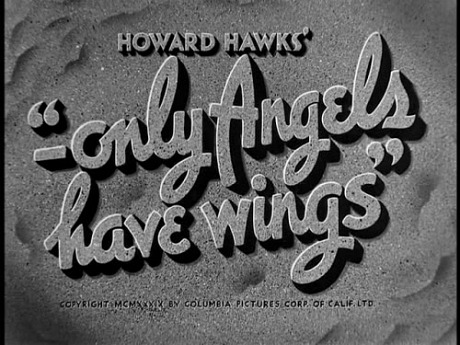 Mitchell’s “Kid” is lying flat. Cary Grant‘s “Geoff” is standing a foot or two away, looking down. A few others are huddled nearby.

Kid: Geoff, tell this guy to quit fussing with me, will ya? I’m all right.

Geoff: Sure. (He holds his cigarette to the Kid’s mouth.) Here.

Kid: How’s the other guy?

Geoff: Hands burned and one side of his face.

Kid: He’s all right, Geoff. Could’ve jumped but he didn’t. Just sat right there and took it like it was an ice cream soda. Buy him a drink for me, will ya?

Geoff: Sure I will.

Kid: Hadn’t been for those birds, we’d have made it.

Geoff: Sure you would.

Kid: I’d make a windshield at an angle and they’d bounce off.

Geoff: Not a bad idea.

Kid: Funny. Wondered why I couldn’t feel anything. Well, guess this is it, then. Bad sport. Gee.

Geoff: What is it, fella?

Geoff: (To everyone) Get out of here. Hurry up. You too, Doc, use both feet. (They leave. Geoff turns back.) What is it fella? Come on, you can tell me.

Kid: I didn’t want them to see me.

Geoff: Of course you’re not.

Kid: It’s just that…it’s like doing something new. Like when I made my first solo. I didn’t want anybody watching then, either.

Kid: I don’t know how good I’m gonna be at this.

Geoff: Do you want me to go too?

Kid: I’d hate to pull a boner in front of you, Geoff.

Geoff: Sure, sure I know. Here y’are, boy. (He gives him a last puff on his cigarette.) So long, Kid.

April 19, 2016by Jeffrey Wells4 Comments
« Previous post
Oscar Babies
Next post »
What I Did On My Spring Hiatus