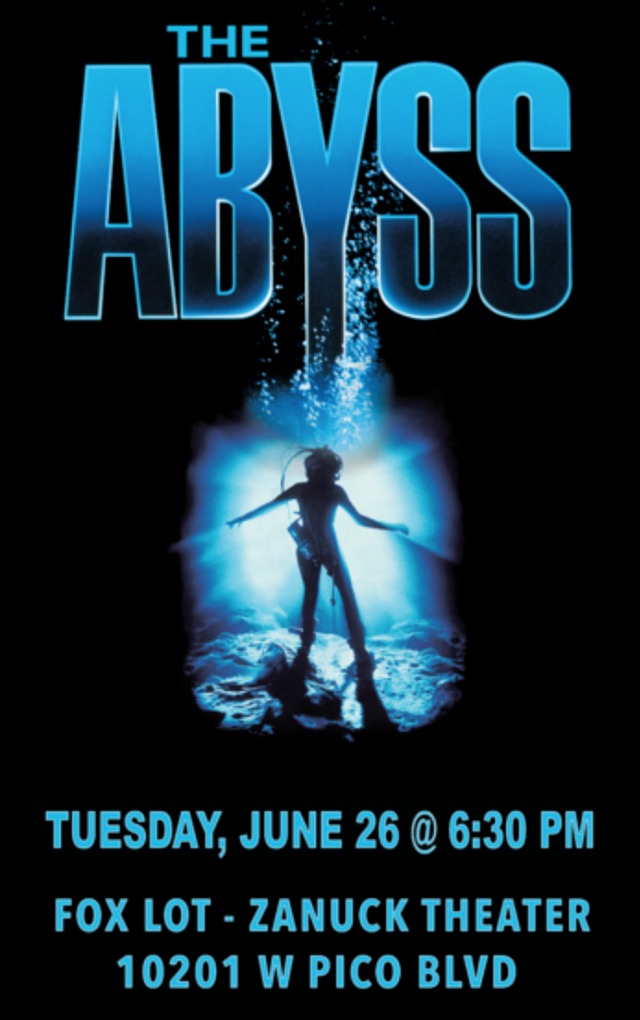 “I felt last night as I did in 2009, that the absolute showstopper of The Abyss (and one can make a strong case about several set-pieces) is towards the end when Ed Harris has to confront Mary Elizabeth Mastranonio’s decision to drown and subsequently revive her when all of his crew have abandoned hope. It is one of my favorite moments of Cameron’s oeuvre — definitely his most human — and it’s essentially that sequence with Seymour Cassel in Cassavetes’ Faces but placed within the framework of a Jules Verne-esque blockbuster of high magnitude. The woman next to me exhaled loudly when it was all over and turned to her companion and uttered ‘Jesus Christ’ and it made me smile to think how strong of a sequence that remains.

“People forget that 70mm did not necessarily play on the biggest screens back when 70mm was a fairly regular part of a major studio release. The great selling point of 70mm was often the sound—things like 6-track mag surround. And while The Abyss looked amazing (hardly a scratch on the print except for the heads and tails of reels and the color appeared as vibrant as release weekend in 1989, I’d surmise), the sound was what stood out. In other words, I feel that the true value of this print was its sound mix.

“The Abyss, while amazingly lensed, is interestingly small-scale when you consider the 70-30 breakdown of action/wide shots vs. close-ups and filthy interiors. I could not help but think of the way that something like, say, The Hateful Eight uses its 70mm for interiors and faces and not trains and horizons. But this is where the sound comes in, for the 6-track mag gives every boom and spark and whisper and thud and gurgle a kind of weight that I don’t often hear anymore.

“I think I noticed more of Alan Silvestri’s score, too — especially the quieter stuff that I didn’t know was even there in past viewings. Of note is the fact that people applauded Silvestri’s credit at the end. From a score perspective, this is a unique sounding James Cameron movie. This is Silvestri in Predator mode, with that militaristic tone not unlike Poledouris’ work on Starship Troopers. I bet you that Silvestri may be on the short list for replacing the late James Horner for the next four Avatar movies. Not unlike Silvestri stepping in for Williams on Ready Player One duties.

“Finally, from a visual perspective, it must be said that this 70mm print offered something which was reminiscent to the new unrestored print of 2001 (which I caught about a week ago at the Aero). Matte lines and some of the grain (from optical printing) were all visible. Some people chuckled because, yes, those details appear dated. But they don’t take one out of the story, and I do hope that such things are not corrected for the inevitable 4K home video releases.

“I come to this conclusion not as a purist. For instance, I greatly prefer the final cut of Blade Runner to any other version. I think The Abyss is subtextually about its own production hardships. It feels like Cameron’s Jaws. It feels like a hellish movie to make. And it also deals so intensely with a failed marriage — it ends on a note happier than Cameron’s own dynamic with Hurd — and so the roughness of the movie, the fact that the theatrical is not quite what Cameron wanted, all of this adds to the exhausting, overwhelming experience of The Abyss which, unlike other Cameron shows, feels like he colored out of the lines a bit.

“If the weak moments of Titanic and Avatar stem from its perfectionist ways, The Abyss holds up because no man can truly control the ways of water — at least, not during a 1988 shoot. When you have Harris going full Method on Mastrantonio, possibly risking cracking her actual rib cage, you get the sense that this was the kind of rawness that a filmmaker in his 30s could entertain which, by the time True Lies arrived, a sense of refinement and precision had to take over.”

June 27, 2018by Jeffrey Wells27 Comments
« Previous post
All Kennedy Had to Do Was Wait Seven Months
Next post »
Funny & Zippy, But Somehow Insubstantial