David Poland is calling Steven Soderbergh‘s Che his #1 film of the year. I’m afraid that makes two of us, as I said the same thing 28 days ago. (I hadn’t seen Gran Torino or Waltz With Bashir at the time, but I’ve seen added them to my list of the year’s Top 15.) Here’s Poland’s piece with a few quips and quibbles from yours truly: 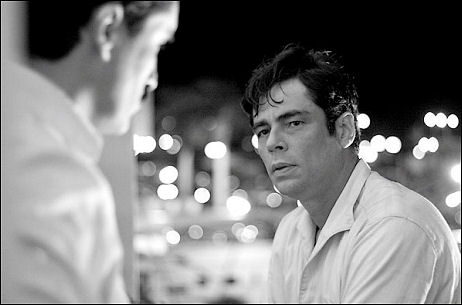 “When the chips are down, Che is as Old Hollywood as it gets.

“From the overture in which we watch Cuba — and then South America — laid out, to the epic length that creates a relationship with virtually every character in a way you rarely see in modern films, to the calm central ‘hero’ who is more real than Gary Cooper would have been, but just as movie star weighty, Che is the great movie experience of 2008. It is a movie that washes over you and seeps into you, as only a film that takes this kind of time can. Yet, I was never bored…not during the first, second, or third viewing.”

I’ve seen ’em both four times and have the exact same attitude.

“The notion that this is two films is silly. They are their own experiences, but they are inescapably two halves comprising a whole. And there is enough room for many different takes on the material. I, for one, do not see it as terribly political. I see it as the story of a man who believes deeply and seeks to bring his belief to action. Others see it as incredibly political, even in the modern context. Others see it very much as a biopic (and they seem to have the most problem with the movie).”

“Soderbergh’s work here, first in narrowing the focus with hands-on producers Laura Bickford and Benicio del Toro and screenwriters Peter Buchman and Benjamin A. van der Veen, then in choosing to shoot an epic, then in production itself…stunning.

“He manages to do a lot of what Terrence Malick does, but without getting distracted by the beauty of the earth. He does a lot of what Michael Mann does, in delivering the intimacy of men who do harm. He does a lot of what Ford did in shooting people anticipating trouble. And he does work that is a lot like the modern intimists like Van Sant and even Kelly Reichardt do, allowing natural quiet to the point of distraction.

“I am in awe of this work. I remain amazed by Soderbergh’s tenacity, as he continues not to do ‘one for them and one for him’ but to be a truly experimental artist, even with big budget films like The Good German, the reflection of which can be clearly seen in Che. You can see some Bubble too.”

Soderbergh’s three Oceans films weren’t made “for them,” Poland is saying? Then who were they made for? I wanted to love them (the second one is my favorite) but they didn’t quite make it. The happiest were the corporations and the popcorn-munchers.

“At 46 (in 9 days from this writing), just 20 years into his movie career, Soderbergh has already made eight indelible pieces of American cinema,” Poland writes. Something tells me he thinks that Solaris is one of the eight indelibles. I’m afraid not. Solaris is one of Sodbergh’s “slump” films along with Full Frontal. Solaris is nothing short of infuriating. You don’t get to join your dead lover by dying. All you’re doing is turning the lights out and the power off and surrendering to the infinite. Love is for the living.

I’m actually a Bubble admirer, and I had a place in my head and black-and-white-loving heart for The Good German. Soderbergh’s ’98 to ’00 golden streak (Out of Sight, The Limey, Erin Brockovich, Traffic) will always be held over him, or even used as a beating stick, but the Che films, for me, signify a profound comeback.

I have to say, however, that I’m very, very concerned about the forthcoming Cleopatra musical . if I were Soderbergh’s most trusted advisor, I’d be saying “don’t do it! This things has the earmarks of a debacle. Especially with Catherine Zeta Jones, who’s too old to play the Egyptian queen, and has an unlikable rep of being quite the acquisitive capitalist, and who doesnt sell tickets(as the failure of No Reservations proved). Do another Elmore Leonard adaptation, another Limey…something in the crime vein.”

“And thank the heavens for Che,” Poland concludes. “You haven’t seen its like in quite away. And don’t expect something like this to pass our way again anytime soon.”