Julia Noktev‘s Day Night Day Night , which is screening for the third and final time this evening at the Telluride Film Festival and which will also screen at the Toronto Film Festival, is developing a certain kind of elitist heat that will be reaching critical mass as it begins to be seen during the second phase of the Toronto fest. The terms I’m hearing are “Bressonian” (as in Robert Bresson) or “Dreyer-like” (as in Carl Dreyer). 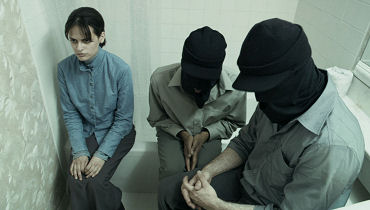 A certain blowhard know-it-all was spreading the word on this film a couple of weeks ago, but now that it’s been seen and chewed over at Telluride it feels more real. Shot by Benoit Debie (Irreversible), it’s about a 19 year-old girl (Luisa Williams) of indeterminate origin andintense eyes who’s in New York City to do something. The big “what” is answered about two thirds of the way through. I’m not going to spoil at this stage, but it’s not going to stay a secret for very long. Think Paradise Now, only much artier.