Update: Hillary Clinton‘s pre-recorded announcement that she’s running for President was, according to some media outlets, supposed to pop around noon Eastern/9 am Pacific. This was never confirmed, I realize, but it’s now 11:45 am in Los Angeles and 2:45 pm in New York. Will her web announcement appear any time soon or does her staff need a few more hours to get it together? How about 6 pm this evening? Or tomorrow morning? I don’t like her, I don’t want her…I’m stuck with her. Naturally I hope she defeats jowly Jeb Bush, but I’m not feeling the heartbeat. The only thing I really like about Hillary in the White House is Bill as First Dude. 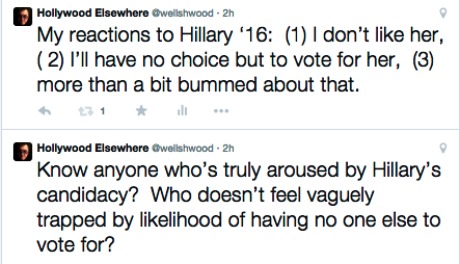 “The argument for Clinton in 2016 is that she is the candidate of the only major American political party not run by lunatics. There is only one choice for voters who want a president who accepts climate science and rejects voodoo economics, and whose domestic platform would not engineer the largest upward redistribution of resources in American history. Even if the relatively sober Jeb Bush wins the nomination, he will have to accommodate himself to his party’s barking-mad consensus. She is non-crazy America’s choice by default. And it is not necessarily an exciting choice, but it is an easy one, and a proposition behind which she will probably command a majority.” — from a 4.12 New York piece by Jonathan Chait.

“For months Clinton has run a front-porch campaign…if by porch you mean Boo Radley’s. Getting her outdoors is hard enough; when she does get out it’s often to give paid speeches to people who look just like her: educated, prosperous and privileged. Needing desperately to connect with the broader public, she opts for the virtual reality of a pre-taped video delivered via social media. Go figure.” — from 4.12 Salon piece by Bill Curry, titled “Hillary Clinton Just Doesn’t Get It: She’s Already Running A Losing Campaign.”

“Pat Buchanan, the venerable Republican operative who advised Richard Nixon and Ronald Reagan, likes to assess politicians as ‘political athletes.’ Putting aside ideologies, policy preferences, even personalities, how do they perform on the political playing field? ‘It’s [about] charisma, charm, savvy,’ he says. ‘Being a political athlete is having an extra dimension — it’s not learned, you’re born with it.” In Buchanan’s long career, the greatest political athletes he’s encountered have been John F. Kennedy, Reagan, Bill Clinton and Barack Obama. ‘They’re naturals…Roy Hobbs or Mickey Mantle,’ he says.

“Hillary, in Buchanan’s view, is the furthest thing from a natural: ‘She’s like Pete Rose, who has to grind out every hit.'” — from Jason Zengerle‘s 4.5.15 New York assessment, titled “Is Hillary Clinton Any Good At Running For President?.”

April 12, 2015by Jeffrey Wells86 Comments
« Previous post
Did You Know I’m “Elizabeth Warren”? No? Who Else Was I Going To “Be”? Not Myself
Next post »
Tulips In The Rain