“Days of Heaven” on Criterion

Coast-to-coast alarm bells are ringing in DVD-aficionado circles in response to yesterday afternoon’s posting about the forthcoming Criterion Collection DVD of Days of Heaven (due 10.23), which has been described by producer-technician Lee Kline as deliberately unsweetened and “very different” from the previous version due to the input of director Terrence Malick, who wanted it to look as natural as possible. Ding-ding-ding-ding-ding-ding…!! 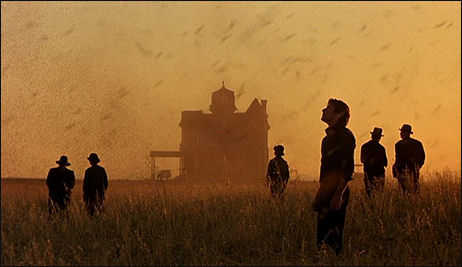 Malick didn’t want the film to look” too postcard-like” so the watchword during the color correction session was “not too pretty,” says Kline. The “gold and the warmth” were taken out, the transfer went “to a really different place” than previous versions, and what emerged was something “beautiful but boy, was it different!,” he writes. “I told Terry people were really going to be pretty surprised by this new transfer, since it was such a radical departure from before,” Kline relates, but Malick said it was “perfect.”

Obviously aware of Days of Heaven‘s rep as one of the most hauntingly beautiful narrative films of the 20th Century (Nestor Almendros‘ naturalistic magic-hour photography is a hallmark) and probably anticipating fan reactions to terms like “really different” and “radical departure,” Kline ends his piece with a dash of backtrack-sidestep exuberance.

“Back at Criterion a couple of weeks later, our New York crew went to work on the restoration. I came into the room where Betsy Heistand was cleaning up some damaged frames, and I said, ‘So, what do you think?” She said, ‘It’s beautiful.’ I had to see it again for myself to make sure we really did everything right, since I was still a bit nervous about how different it was from the old transfer (especially with DVD Beaver around!).

“I sat down in our QC room, turned off the lights, and watched the entire film on our great 24-inch Sony Pro-monitor. Betsy was right: it was beautiful. Days of Heaven finally looked the way it should, and I got goose bumps once again.” 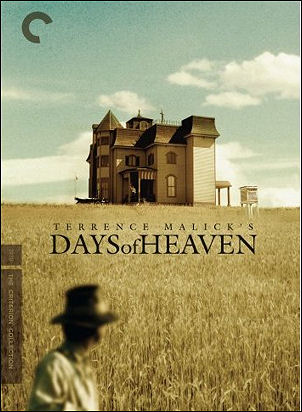 I saw Days of Heaven in 70mm at the Cinema 1in 1978, and no viewings since have ever come close in terms of basic visual grandeur. It seems inconceivable that Malick would change his mind about how the film should look over the last 29 years, so the Criterion DVD will most likely replicate the way the film looked under the best circumstances way back when, in a tip-top screening facility.

Still, one wonders what Kline really and truly means by this Malick-approved DVD being a “radical departure,” and whether or not he isn’t just protecting his political ass by writing a nice upbeat closing graph so no one will get upset, no ruffled feathers.

August 16, 2007by Jeffrey Wells26 Comments
« Previous post
Caro on naive “Once” lovers
Next post »
Lebowskifest, the book, the fans