I’m presuming that the work on Warner Home Video’s forthcoming Bluray of the original King Kong (9.28.10) has already been completed so pleading for a de-graining of this film is, at this stage, three and a half months away from release, a moot point. But I’m going to anyway because at least I’ll be on the record as having done so, and because it may make a difference to the Movie Gods later on. 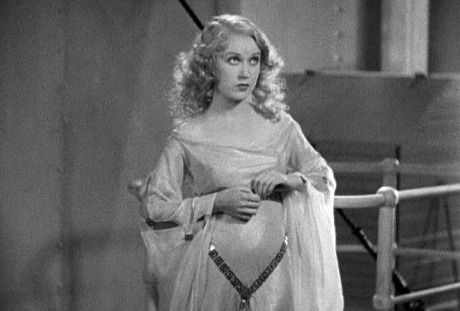 WHV’s Ned Price, George Feltenstein and their team of restorers, remasterers and Bluray transfer artists have repeatedly shown that that no one in the business is more knowledgable or exacting. Their exquisite (i.e., minimally grainy) Casablanca Bluray speaks for itself. For the most part their 2005 King Kong DVD (timed to capitalize on the Peter Jackson version) was a very welcome improvement/upgrade from previous masterings, so I’m not talking about overhauling old Kong too radically — just some digital touchups in this and that scene that will fix certain portions in which the grain smotherings are so intense that they flirt with absurdity.

Nonetheless, let’s hope that the WHV guys (a) haven’t recently succumbed to radical Criterion-style grain-monk theology (i.e., the home-video equivalent of Taliban fervor), (b) understand that certain portions of King Kong are simply too grainy for average eyeball consumption (particularly the scene when the freighter drops anchor off the coast of Skull Island in heavy fog), (c) further understand that Bluray only sharpens and intensifies the monochrome granules occupying a given frame, and (d) therefore came to the conclusion that they needed to hire John Lowry of Lowry Digital to de-granulate in a way that respects the integrity of the image but at the same time recognizes that a classic black-and-white film buried in an Iraqi grainstorm is a bad thing all around, and that the ghosts of Merian C. Cooper and Ernest B. Schoedsack are hovering over them like Bruno Ganz and whatsisname in Wings of Desire and quietly pleading that they do the right thing.