Nikki Finke is reporting that Robert De Niro and Martin Scorsese will team on a Paramount film called The Winter of Frankie Machine, based on Don Winslow‘s book about a retired hit man, although the title will be shortened, she says, to just Frankie Machine. The story’s about an aging hit man (De Niro) who’s hounded out of a respectable retirement as the target of a hit himself. 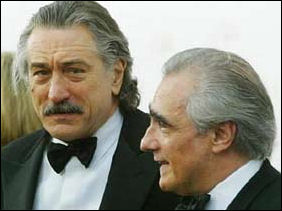 I really can’t stand the idea of watching another movie about another hit man. I’m hit-manned out, although this one sounds more like a meditation on old age and the end of the road. The real problem is that De Niro is looking way too bulky and roly-poly these days. It’s good that Scorsese will be doing another mob movie, but he needs to summon the courage to tell De Niro that he’s over the hill and has lost his mojo. He’s eaten too many plates of rich food and gotten too soft and jowly….he looks like an old Russian wheat farmer.
Howard Hawks (or was it John Ford?) came to the conclusion sometime in the ’60s that John Wayne had gotten too old to convincingly play the same tough-guy hero he’d been playing since the early ’40s. It was a hard decision to come to, but Hawks/Ford bit into the leather and stood their ground because they were men of their word who could hear the bell tolling. You think I’m making this up? I’m not. When you’re past it, you’re past it….and that’s that.