I read an item in the London Times yesterday on the plane from Frankfurt to JFK, about a 61 year-old Croatian man named Tomislav K. who died last Saturday morning while sitting in a seat on a moving tram in Zagreb, and how his body wasn’t noticed until he (it) had cruised around town for roughly six hours. 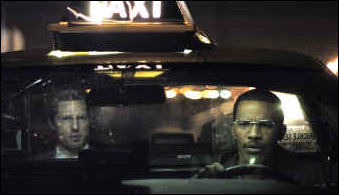 The same thing happened to a 55 year-old guy named Edy Haryanto on or about April 27th in Jakarta, Indonesia, the only difference being that he travelled around for “at least half a day” before being noticed, according to this MSNBC story.
My first response when I read about Tomislav K. was, of course, that early scene between Tom Cruise and Jamie Foxx in Michael Mann’s Collateral, which went precisely as follows::

Vincent: “No. Tell you the truth, whenever I’m here I can’t wait to leave. It’s too sprawled out, disconnected. You know? That’s me. You like it?”