Amelia has a pathetic 12% creme de la creme rating on Rotten Tomatoes and a 38 score on Metacritic. The three biggest supporters on the latter site are the Hollywood Reporter‘s Ray Bennett, Roger Ebert and the Philadelphia Inquirer‘s Carrie Rickey. 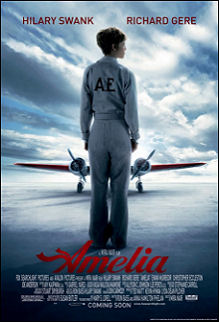 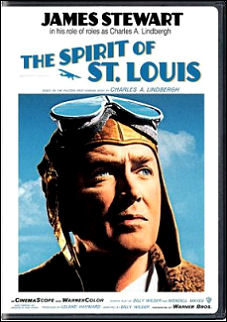 Ebert’s review isn’t all that ardent. It’s really more of a mixed reaction that includes some bending over backwards in order to dispense generosity and graciousness. But there’s one thing he says about Billy Wilder‘s The Spirit of St.Louis — a much better film about a legendary flyer — that bothers the hell out of me. Actually two things.

“I’m not suggesting that [director] Mira Nair and her writers, Ronald Bass and Anna Hamilton Phelan, should have invented anything for Amelia,” he begins. “It is right that they resisted any temptation. It’s just that there’s a certain lack of drama in a generally happy life.” In other words, they probably should have invented something to make Amelia Earhart‘s story more interesting. They should have said “the hell with the facts” and lied about her life.

“[But] at least by treating her big flights as chapters in a longer life, they sidestepped the dilemma that defeated Billy Wilder when he starred Jimmy Stewart in The Spirit of St. Louis,” Ebert continues. “Lindbergh’s life offered such promising details as a 1930s decoration by the Nazis and the kidnapping of his baby, but Wilder focused on the long flight itself, during which the most exciting event is the appearance of a fly in the cockpit.”

That’s actually bullshit because the scheme of Wilder’s film uses the flight as a through-line while telling Lindbergh’s back-story in numerous flashbacks. For my money these scenes break up the flight’s monotony and keep the film going in a dutiful, somewhat stodgy, mildly engaging way. 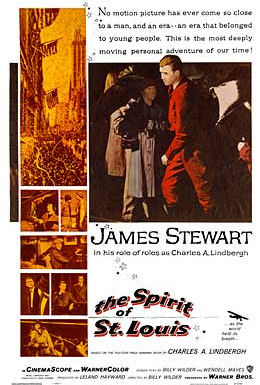 And as I wrote a little over three years ago, Wilder and Spirit weren’t defeated because The Spirit of St. Louis “pays off emotionally at the very end. In a blatantly dishonest way, okay, but effectively. And I’ve always found this fascinating.

“It’s mainly because of Wilder’s storytelling discipline — he was always one to plant seeds and make them pay off much later in a film — and also, partly, due to Franz Waxman‘s majestic music. I only know that I hate it when smart critics diss a film that’s at least partly successful.

“Just before the exhausted Stewart is about to land his plane at Le Bourget field in Paris, he starts to lose it — he starts freaking and whimpering over a simple, sudden inability to focus on the basics of landing a plane.

“The movie has briefly acknowledged about an hour earlier that Lindbergh was an atheist who believed only in his own aeronautical skills and in the engineering of planes. But just as Stewart is melting down above Le Bourget he thinks back to a flying prayer that a priest once passed on, and he says aloud, ‘Oh, God, help me.’ And of course he lands safely.

“And I swear to God it seems like the right thing to say at that moment — for Stewart/Lindbergh, for the audience, for the film. And I’m saying this as a half-atheist myself. (I found satori when I was 20 — I held universes in the palm of my hand — but mystical flotation fades over time.) It was shameless of Wilder and coscreenwriters Charles Lederer and Wendell Mayes to have pulled such a cheap trick (pandering to conventional religious sentiment, etc.), but it’s amazing when bullshit works despite it obviously being bullshit.

“Jean Luc Godard had a somewhat similar reaction when he said he was seized with affection for John Wayne‘s Ethan Edwards at the finale of The Searchers when he picks up Natalie Wood and says, ‘Let’s go home, Debbie.’ That’s a dishonest moment also. Ethan is a racist sonuvabitch, and there’s no way he’s doing to do a last-minute 180. But the moment works anyway.

“I’ve always felt that any movie that puts at least one lump in your throat is not impersonal. If the filmmakers are talented and clever enough to “get” you, they’re always coming some emotional place themselves. You can’t be totally cynical and touch people. You have to mean it on some level. And that means getting down to the ‘personal.'”

It follows that neither can you be overly cautious and carefully measured and slavishly devoted to historical fact, as Nair’s film is for the most part, and expect to touch people either. Amelia is a bland and bloodless travelogue through Earhart’s life while The Spirit of St. Louis was and is a much better film because it sells an emotional package (while hiding numerous lies and historical omissions) with impressive skill .

For that matter Flight for Freedom, that heavily fictionalized 1943 film about Earhart with Rosalind Russell and Fred MacMurray, worked better also, albeit on its own terms. It’s a dismissable film in many respects, but at least it understands itself and knows how to sell the schmaltz in a way to that is more engrossing than what Amelia tries to do. Russell lying to MacMurray at the end, telling him everything he wants to hear, knowing full well she’ll be making the flight on her own, etc. It’s dream-factory crap but if half-works. Whereas Amelia doesn’t work at all.