A couple of nights ago I re-watched Michael Mann‘s The Insider (’99) for maybe the sixth or seventh time. Oddly enough I noticed a couple of things for the very first time.

One is that the movie stops dead in its tracks whenever Diane Venora, portraying the brittle, fragile wife of Russell Crowe‘s Jeffrey Wigand, has any dialogue. “Liane Wigand” expresses the same damn thing in scene after scene — “I’m scared, I’m upset, this is intimidating, what about the children?, I feel threatened” — over and over and over, and after a while her vibe becomes really and truly deadly.

The second thing I noticed is that this 158-minute film doesn’t really kick into gear until the 90-minute mark, which is when Wigand testifies against Big Tobacco at a hearing held by the state of Mississippi. Before the 90-minute mark it’s an in-and-outer — always interesting and well-crafted but less than riveting from time to time, largely because of Diane Venora mucking things up. One of the reasons the final 68 minutes is so great is because Venora has disappeared, and thank God for that!

Posted on 12.21.19: The night before last (12.19) a special 20th anniversary screening of Michael Mann‘s The Insider happened at the DGA Theater in Los Angeles. This followed an identical event that happened at the Museum of Modern Art on 11.1. Usually such screenings serve as a promotional bounce for a forthcoming remastered Bluray (like a 4K version), but I’m not aware of any such plan for The Insider. A standard 1080p Bluray, the yield of “a new digital restoration”, was released by Touchstone Video on 2.19.13. 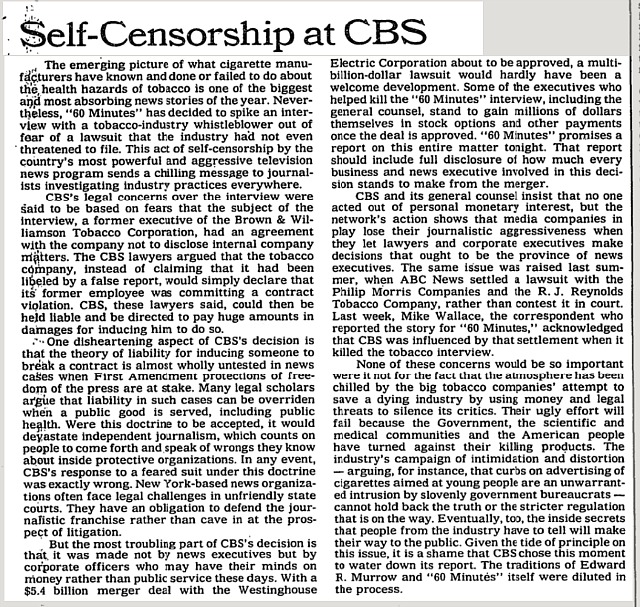