The legendary Roger Deakins has delivered distinctive, mouth-watering, world-class cinematography on so many great films it’s almost tiring to review them all. All of those Coen brothers films alone…Barton Fink, The Hudsucker Proxy, Fargo, The Big Lebowski, O Brother, Where Art Thou?, The Man Who Wasn’t There, Intolerable Cruelty, No Country for Old Men, A Serious Man, True Grit and the forthcoming Hail, Caesar!. Not to mention The Shawshank Redemption, Kundun, A Beautiful Mind, In the Valley of Elah, The Assassination of Jesse James by the Coward Robert Ford…the list goes on and on. 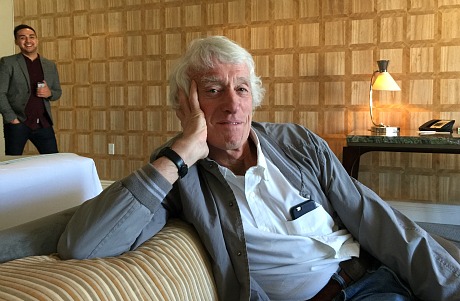 I spoke to Deakins around 10 am this morning inside West Hollywood’s London hotel. The primary idea was to discuss Sicario but also to afford myself and others a chance to remind everyone that this brilliant resident of Santa Monica — British, lanky, white-haired, laid back — has been nominated for the Academy Award for Best Cinematography twelve fucking times, and that it’s time to finally give him the trophy already.

Okay, Deakins might lose again (if he’s nominated, that is, for his work on Sicario) to Emmanuel Lubezki’s lensing of The Revenant, but he has to win sooner or later, right?

We spoke a bit about Hail Ceasar! and especially the forthcoming Blade Runner remake, which Deakins was cagey about.