Death In The Big City

12.8.20 will be the 40th anniversary of John Lennon‘s murder. I’ve written about this four or five times, but how can I ignore the 40th? How can I not go there?

I was in London, waking up on a couch in Stockwell, when I heard the news. I was there to do a Gentleman’s Quarterly interview with Peter O’Toole, whose career-reviving performance in The Stunt Man was one of the hot topics of filmdom. (I wound up doing it a couple of days later in the basement of “Shady Old Lady”, O’Toole’s Hampstead home at 98 Heath Street.)

So I was crashing with a couple of ladies I knew through a journalist friend, and the first thing I heard in the early morning light (maybe 6 or 6:30 am) was “Jeff, wake up…you need to hear this.” And then the radio came on.

Being in London that morning made me feel vaguely closer to the Lennon legacy. Somewhat. Even though Lennon had been a U.S. resident for eight-plus years. I felt gutslammed like everyone else, but I didn’t choke up for another few hours. That evening in fact. After a couple of pints. Alcohol does that. 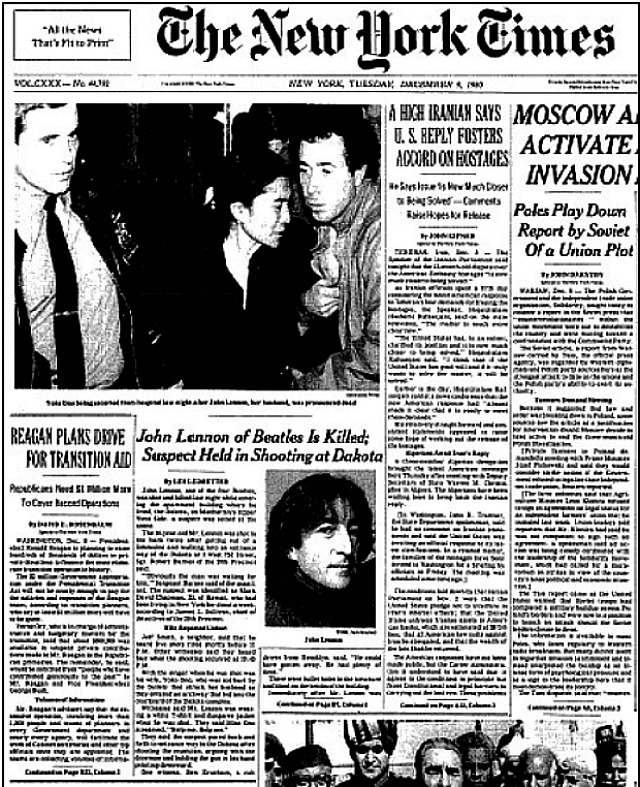 My stoic younger brother wept, according to my mother. He visited my parents’ home (45 Seir Hill Road, Wilton, CT) the following day to talk it over, and it all leaked out. The poor guy didn’t wind up living what anyone would call a driven or a bountiful or even a somewhat happy life. He passed from an accidental Oxycontin and alcohol overdose in October 2009.

If I’d been in the States I doubt I would’ve heard the news from Howard Cosell on Monday Night Football. I’ve never watched football games, ever, for any reason. And I never will.

Many rock stars had died of drugs and fast living in the ’70s (Hendrix, Morrison, Joplin), but Lennon’s murder was the first big twentysomething and thirtysomething boomer tragedy — an event that throttled the big media world, and which made everyone who’d ever learned Beatle harmonies feel suddenly slugged in the heart, not in a sharply painful romantic breakup way but in a slightly older person’s (certainly not a younger person’s) way…a terrible weight of the world thing…an awful sense of vulnerability and the jabbings of a harsh and cruel world.

In the obsessively warped mind of Mark David Chapman, Lennon was killed for having betrayed his destiny as a kind of spiritual leader and torch-bearer, which he arguably was from ’64 through ’70 (the end of the dream coming with the release of Plastic Ono Band).

He was therefore assassinated, in Chapman’s mind, for the crime of having withdrawn from the hubbub and become a retiring house husband in the Dakota…just another pampered rich guy whom Holden Caulfield would have strongly disapproved.

YouTube guy: “I was watching that night. Never in a million years would I have imagined that John Lennon would be murdered, and that I would learn of his death from Howard Cosell on Monday Night Football. Like millions of fans, I burst into tears. I felt like I’d personally been robbed of most of my childhood. Of course I grieved for his family, but I was a member of John Lennon’s larger family, which was the whole world.” 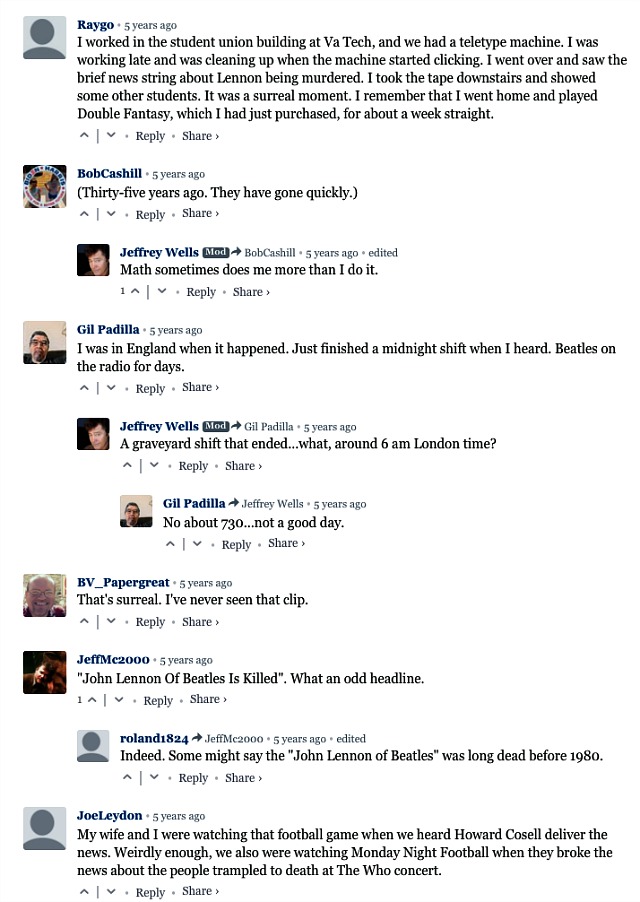 HE comments upon 35th anniversary of Lennon’s murder.