On The Death of Miss Sloane 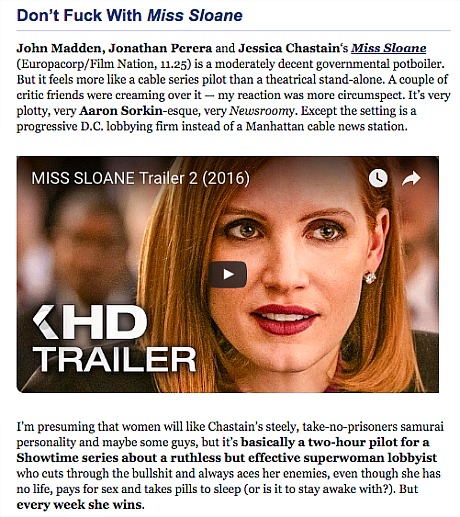 Last weekend Toronto Globe & Mail critic Kate Taylor wrote the following: “As played by Jessica Chastain with an icy blast so chilling you half expect her supporting cast to turn up wearing fur, ace lobbyist Elizabeth Sloane is superior, sarcastic and unfeeling.

“In [this] political thriller written by newcomer Jonathan Perera and directed by veteran John Madden, the effect is so overwrought it’s almost laughable. Elizabeth Sloane is not merely more ruthless than any man in Washington, she is also scrubbed of any obvious humanity; she knows no morals nor humor and finds her own appetites inconvenient. She spends her days spying on her rivals, besting her colleagues and barking at her juniors before shovelling down dinner in a Chinese dive and mounting a male escort in a swank hotel.”

Why the film wasn’t called Ms. Sloane is beyond me. The title sounded patronizing from the get-go.