In Leslie Bennett‘s Vanity Fair profile of Cate Blanchett, the actress talks about the Benjamin Button grim-reaper factor. Director David Fincher told her it would be “about death,” she says, “and I think that’s great.” And so do most of us, I believe. We alI think it’s pretty darn cool when a movie comes along and tries to get us to confront our mortality. 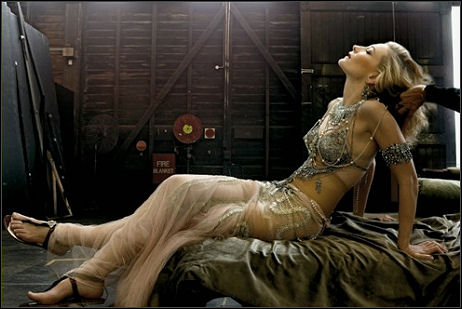 “We’ve enshrined the purity, sanctity, value, and importance of bringing children into the world,” says Blanchett, “[and] yet we don’t discuss death. There used to be an enshrined period where mourning was a necessary part of going through the process of grieving; death wasn’t considered morbid or antisocial. But that’s totally gone. Now we’re all terrified of aging, terrified of death. This film deals with death as a release. I hope it’s a moment of catharsis.”

“It’s sort of like a repository for your grief, about whatever you grieve about — the loss of loved ones, the missing of opportunities, whatever,” Fincher tells Bennetts,. “You hope it will leave people feeling hopeful about certain things, and sad about certain things.”