The Last Great Hope of the 2007 Oscar season is Denzel Washington‘s The Great Debaters, which isn’t saying much. “Hope” doesn’t mean zip in this context. No one has seen the Weinstein Co. release (the first screening happens on Tuesday, 11.20) and there are concerns that Debaters‘ inspirational story might be (a) a little too familiar and (b) take a little too long to unfold. But Washington’s a focused and confident director and I’ve been told the film works very nicely, so let’s see. 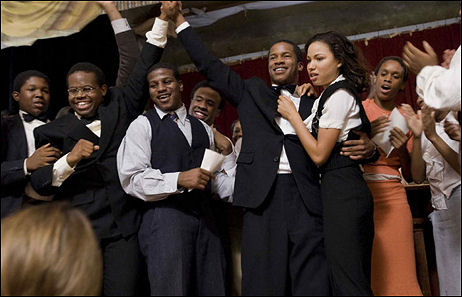 I’m saying this because the other presumed award-level contenders — Charlie Wilson’s War, Sweeney Todd and The Bucket List — are looking hazy as Best Picture contenders.

The word all along has been that Sweeney may be trippy or rousing or even euphoric on its own terms, but it’s too Burton-ish and purple-arterial for the Academy.

I’ve read the script of The Bucket List, and it suggests that Rob Reiner‘s film will be fine — it has an assured feeling for character comedy and offers a certain tidiness, wholesomeness and old-guy wisdom. (Of course, tidiness can be a hindrance in itself.) It’s no secret that director Reiner, nice guy and Hillary Clinton Democrat that he is, has been off his game since the mid ’90s, and I don’t see any great Bucket surge in the offing.

What happened to Charlie Wilson’s War, you ask? Nothing. It’ll begin screening later this month and then we’ll know what’s what. It’s just that (I can’t ignore this) a negative CWW comment popped up earlier this evening from a certain blogger who has since taken the comment down. How’s that for a solid piece of information?

I’m not simple-minded enough to presume that this opinion is necessarily related to Universal’s decision not to stage a traditional bells-and-whistles CWW junket, which is at least partly due to a reluctance (or an inability) on the part of director Mike Nichols and the cast to assemble in Los Angeles for more than one day (Friday, 11.30). They had to know that at least some eyebrows would be raised about this. And we all know how this plus the withdrawn negative item is going to spread over the next 48 to 72 hours.

All this crap tells us nothing concrete. Certainly nothing I’d care to put into words, but I am starting to suspect (in faint little hair-on-the-back-of-the-neck ways) that Charlie Wilson’s War, sharp and entertaining as it might be, isn’t this year’s Million Dollar Baby. The combination of these two items plus Julia Roberts‘ neo-Texas accent won’t support it.