Some random responses to John Horn‘s 4.14 L.A. Times piece exploring the why and wherefores of the recent talent-agency shakeups. I’ve read it twice and I still haven’t absorbed the “there” that is presumably there. I’m in the middle of a third read as we speak. I’m down to reading sentences out loud and repeating them until the “oh, now I see!” kicks in. 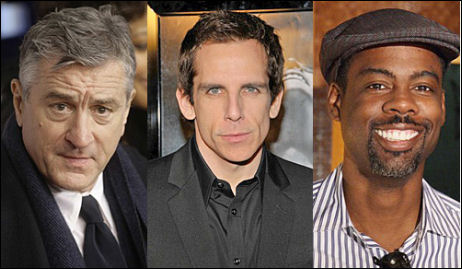 The intra-agency trades “are related to growing anxiety over the future of the film business,” he writes. How do you quantify “growing” anxiety? The talent representation business runs on anxiety. Agents feed on it. It’s the one constant that has permeated the business since the days of silent pictures. A monkey with claws dug in to every player and every career. John Horn, trust me, is himself haunted by it. I eat anxiety for breakfast. To me it isn’t a monkey but a gorilla, but on some level I’m resigned to that.
Robert DeNiro going from CAA to Endeavor is a big “whoa”? In whose mind? In the eyes of the critics and reading public the man is finished as any kind of heavy talent or formidable player. He’s made too much crap, taken too many paycheck jobs. One look at that godawful Righteous Kill trailer and you go, “Jesus, God… what happened?” Every second or third film the man makes could and should be something smallish, soulful, risk-taking. Whoever you may consider to be the Robert Bresson, Luis Bunuel, Pier Paolo Pasolini or Michelangelo Antonioni of our time, DeNiro should at least be trying to hook up with these talents. Has he? Doesn’t seem like it.
“Instead of gambling on a broad and eclectic slate of movies, the studios are making creative decisions as much on spreadsheet projections as gut reactions to great screenplays,” Horn reports. “Studios not only are making far fewer films but also allowing concepts and marketing hooks to govern greenlight decisions rather than a specific actor’s availability and interest.” Haven’t producers been lamenting “high concept” thinking since the early ’80s? Groaning how difficult it is to get a movie going that isn’t driven by a simple, easy-to-digest marketing hook? This has been a Hollywood malaise issue for a long time now. What’s new here?
Two of the significant talent switches listed by Horn are those by actors Ashton Kutcher (from Endeavor to CAA) and Jennifer Connelly (ICM to CAA). No offense, but who cares what Kutcher is up to? I admired Connelly’s work in House of Sand and Fog and A Beautiful Mind, but are her representational loyalites matters of any real interest to anyone? I’m not trying to be an asshole. I’m just asking.
“The head of production at one studio said that when his movie budgets now grow too expensive, he insists that actors give up one of their prized perks: a percentage of every dollar that comes in.” Ooohh, poor babies!
“Several managers said that many actors who were once guaranteed to open a film at the box office are no longer a sure bet, as was proved by the poor openings for Will Ferrell‘s Semi-Pro and George Clooney‘s Leatherheads.” Ferrell has done fairly well until recently, but when has Clooney (whom everyone loves) ever opened anything?