“Disappointment Blvd.” Has Been Bumped Into ’23

If A24 was smart, they would screen Ari Aster‘s four-hour version of Disappointment Blvd. at Venice and Telluride two months hence, and then release two versions a few weeks later — i.e., the shorter version that A24 management allegedly prefers plus the four-hour cut. They could release the shorter version theatrically while releasing the longer version via streaming. Or vice versa or any which way. It would become a huge thing to see both and debate the differences. 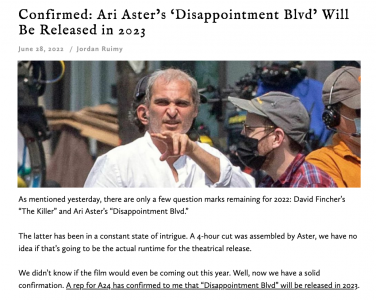