The totally expected deal for Guillermo del Toro to direct The Hobbit in two parts has been signed, sealed and delivered. It’ll be a New Line-MGM joint production that will eat up four years of Del Toro’s life. Obviously a good gig, obviously an excellent choice, and congratulations to a beautiful human being on a very fine score. 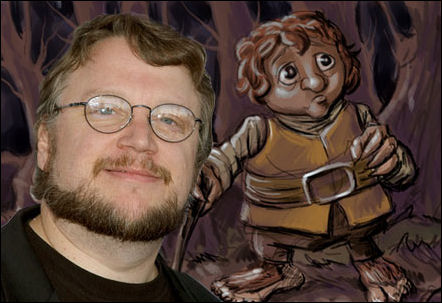 But if you ask me there’s a downside to this deal. It means that Del Toro, a truly gifted director with the power to be a 21st Century Luis Bunuel or better, won’t be making any adult-market, real-world-grappling, artistic-growth movies in the vein of Pan’s Labyrinth and The Devil’s Backbone for a long, lonnng time. He’ll be Hobbit-ing until at least 2012 and probably into 2013.
Del Toro’s will be moving to New Zealand for the next four years to work with Peter Jackson — arrghhh! — and his Wingnut and WETA production teams. The two films will be directed back to back, with the sequel which will deal with the 60-year period between The Hobbit and The Fellowship of the Ring, the first of the Lord of the Rings trilogy.