I have this thing about getting to bed before the sun comes up. I got home from The Dark Knight at 4 am, and I can’t start banging out a review…not now. Okay, a few words. Some have lamented the oppressive, too-convoluted, over-labynthian pitch darkness of Chris and Jonathan Nolan‘s script. But the film is so well slapped together, you see, and committed to its Trip of Darkness, and it doesn’t really drag all that much besides so what’s to complain about? This movie knows itself, knows the turf, keeps the engine tuned, nails it all down.

Are the action sequences confusing? Uhh, yeah…they are. Like all action scenes these days. I was asking myself why they’ve gotten harder and harder to follow and sort through over the last ten years or less. I was keeping up for a while there with the Knight fights, and then I would fall behind and after a while I just said “fuck it.” But I really quite liked the way the Joker’s social experiment with the two ferry boats worked out. To me, that was the movie’s beating-heart payoff. It’s almost a kind of Obama moment.
But if that doesn’t work for you there’s Heath Ledger‘s wet mangy hair to look forward to, and what a delight that is. The Dark Knight never once pissed me off or pulled me down, and I loved the ending. But Ledger lifted me out of my seat. I fell in love with life again as I watched him — with humanity, with acting, with the whole joy-of-movies thing. Ledger brought me to tears in Brokeback Mountain, and here he was making me feel another current. And the poor guy’s dead, dammit. What a godawful sad thing. Burns right through.
Ledger’s cackle-voice voice alone made me laugh, chuckle and grin continuously. That “hiiii” he does in front of the bed of a certain hospital patient will never leave my head for the rest of my life. I’m resolved to start looking around for sound clips tomorrow and start practicing my Ledger/Joker voice so I can perform it at parties. The usual praise terms — delicious, delectable, deranged — apply to his swagger, of course, but this is more than just another nutso swan dive into frazzled delirium. It’s a piece of instant history. 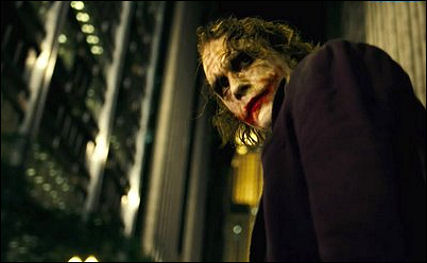 I’m not feeling a second’s hesitation in saying that Ledger’s Joker is now part of the eternal firmament of legendary screen villains. Now and forever he’ll stand side by side with Robert Mitchum‘s Night of the Hunter preacher, Anthony Hopkins‘ Hannibal Lecter, Victory Jory in The Fugitive Kind, Robert Walker‘s Bruno Antony in Strangers on a Train, Tony Perkins‘ Norman Bates…who else? I can’t think anymore. I’m whipped. I’m going to bed.