That’s not just Tom Hanks with a worried look on his face — it’s also me. Or at least a portrait of how I’m feeling. The guys in red and gray tunics and hats are journalists and Sony publicists who may be harboring secret information about a screening this week of Angels and Demons. I’m worrying about other stuff besides (i.e., most of it having to do with pre-Cannes issues), but this, right now, is certainly front-and-center. 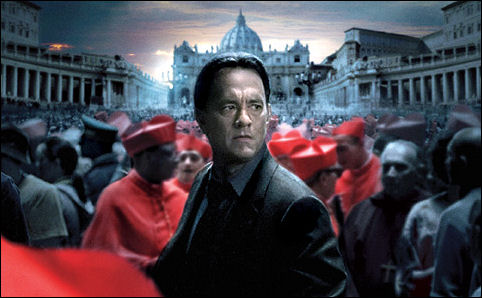 Ron Howard‘s film is opening stateside a week from Friday (i.e., on 5.15), and of course I leave for Cannes next Monday, 5.11, and the Manhattan all-media screening is on Wednesday, 5.13, so I need to see it this week. I can always catch it on 5.13 at a commercial theatre in Cannes, but it would be so much easier to just get it over with here. Preferably in the inner-sanctum comfort of the Sony screening room at Madison and 55th.

On a scale of one to ten, how cranked are Hollywood Elsewhere readers about lining up to see this? To what extent did The DaVinci Code burn the bridges of trust? We all know what Angels and Demons will almost certainly be. The clips make it obvious. And we all understand it’ll clean up like the first one did.

Dan Brown‘s Angels & Demons novel is about some kind of threat to the Catholic belief system from the Illuminati, one of the Vatican’s ancient adversaries, etc. Hank’s ‘symbologist’ Robert Langdon is hired by the Catholic higher-ups to sift through the clues left by the Illuminati to find the “ticking time-bomb” they’ve planted under Rome. The Illiuminati “have been dedicated since the time of Galileo to promoting the interests of science and condemning the blind faith of Catholicism,” the copy says. Sounds like a plan.