“I admire John Travolta, but using this movie star, rather than the [Broadway stage version]’s Harvey Fierstein, as Edna Turnblad, is an idiocy on the same level as replacing Julie Andrews with Audrey Hepburn for the movie version of My Fair Lady, declares New Yorker critic David Denby. 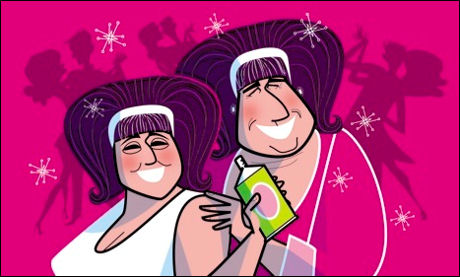 “Both Fierstein and Divine, who played Edna in the [1988 John Waters] movie, worked as female impersonators who confidently let us in on the joke. In the show, when Fierstein held forth on life and love and the Gabor sisters in his basso absurdo — a testosterone-drenched Bensonhurst snarl — he was not a man pretending to be a woman; he was a man openly playing a woman and speaking in his own voice.
“But Travolta does a wistful imitation of the female sex. Buried in a full-body fat suit and various silicone prosthetic appliances, he looks rounded, smooth, and cute, rather like Miss Piggy, and he speaks in a light, high female voice — he sounds a little like Robin Williams in Mrs. Doubtfire, without the lilt.
“The role demands exaggeration rather than modesty, yet Travolta, with a misbegotten sense of duty, tries to give an authentic performance as a working-class Baltimore housewife of forty-five years ago — a shy, guarded woman who is embarrassed about her weight. It√É¬¢√¢‚Äö¬¨√¢‚Äû¬¢s a touching attempt, but the lunatic joke that started with Divine has almost vanished.”