Denby on “No Country”

In the 2.25 New Yorker, critic David Denby has written a lengthy love letter to Joel and Ethan Coen, beginning with an awed description of the first 20 minutes of No Country for Old Men. 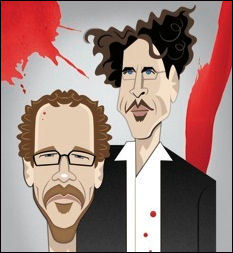 Then he rolls the clock back to 1985 and Blood Simple and reviews the highlights of their career, tracing their gradual evolution from sardonic snickering jokers who often seemed outside their material to masters of austerity and dry irony and chilling silences, first in Fargo and then, 11 years later (and after at least a couple of films that seemed minor, if not out-and-out shortfalls), in No Country.
And then comes the wind-up to the finale and you think, okay, here we go, the crowning final paragraphs in which Denby will drape a red-velvet cloak over the Coens’ shoulders and annoint No Country as their ultimate, Oscar-worthy triumph and….wham, he trashes the ending.
“No Country is the Coens’ most accomplished achievement in craft, with many stunning sequences, but there are absences in it that hollow out the movie’s attempt at greatness,” he writes. “If you consider how little the sheriff bestirs himself, his philosophical resignation, however beautifully spoken by Tommy Lee Jones, feels self-pitying, even fake.
“And the Coens, however faithful to the book, cannot be forgiven for disposing of Llewelyn so casually. After watching this foolhardy but physically gifted and decent guy escape so many traps, we have a great deal invested in him emotionally, and yet he’s eliminated, off-camera, by some unknown Mexicans. He doesn’t get the dignity of a death scene.
“The Coens have suppressed their natural jauntiness. They have become orderly, disciplined masters of chaos, but one still has the feeling that, out there on the road from nowhere to nowhere, they are rooting for it rather than against it.”
My God, those are the same beefs levelled against the ending of the film last May when it first showed at Cannes! Perceptions evolve, you move past, the fog lifts.
The last 20 minutes of No Country are about gathering forces and the tentacles of fate reaching round and grasping with unstoppable force. The movie becomes destiny itself — that thing you can’t see coming and can’t stop. It assumes the shape and inevitability of night. It becomes, in short, God-like, which is to say terrible, impassive, cruel. It isn’t very comforting (except in the words of Mr. Jones as he speaks of his dear departed father), but man, it sure holds you in its grip.