Depp Does It His Way 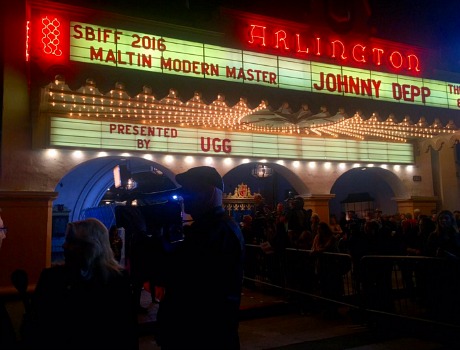 “Audience has been in seats since 7ish, certainly 7:30. It’s now 8:35 pm, and the Johnny Depp show has yet to begin.” Later: “Depp show finally started with his entrance at 9 pm. He looks like he’s dropped a couple of pounds. But only a couple.”

“God, how I love Depp’s smiley-face performance in the brilliant Ed Wood! Every line, every enthusiasm, all of it.

“Inspired back-and-forth between Depp and asshole admirer /friendly heckler in second row. Depp: ‘I may not be growing the same thing you’re growing…’ Depp and second-row bigmouth keep the back-and-forth going. Maltin: “This is my job” — i.e., asking the questions. Depp to second-row idiot: ‘Don’t you say anything. I’m waitin’ for you, mothuhfuckah.'”

“This interview is stoned. I love it. Partly.”

Depp to Maltin: “I was very lucky [to be friends with Marlon Brando]…he “was a lot of things to me.”

Maltin to Depp about The Brave, the 1997 film that Depp directed, co-wrote and costarred in along with Brando: “I hope that some day you’ll consider letting us see The Brave.” Depp: “You can see it any time you want.” (Privately?) Soon after the notion of showing it at next year’s Santa Barbara Film Festival is floated, indicated, fiddled with.

“Depp’s recollection of revulsion when an agent suggested that releasing The Brave in wake of Brando’s death is touching.”

“Depp show has been running for 100 minutes now. Time to start wrapping it up. End it by 11 pm, please. There’s an after-party to hit.

“Depp physically shielding himself from Scott Cooper’s lecturn praise. Doing ‘wrap it up’ gestures. Depp is a real subversive.” 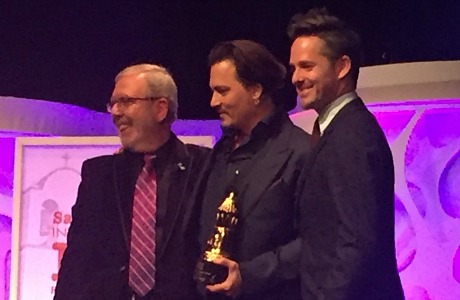