Diary of a Mad, Super-Privileged Princess

… on the Verge of a Nervous Breakdown. Alas, not directed by Pedro Almodovar.

A British critic has called it a “magnificent farce.” I’m sorry but that’s an absurd claim. It’s a surreal mindscape movie that has a half-decent singalong ending (“All I Need Is A Miracle”) but otherwise pretty much stays in the same place start to finish. It’s a kind of nightmarish Stepford Wives (or wife) in the country.

Kristen Stewart will be Best Actress nominated, I’m presuming. The narrative has already been written, right? The movie is appalling but she’s very good at what she’s been asked to do — let’s just leave it at that. Her Diana speaking voice is breathy and whispery and hard to understand, but that’s okay. We enjoy being in the dark about certain things.

Stewart plays the mad, close-to-cracking-up Diana to the unstable-adolescent-teenager, Julie Harris in The Haunting hilt — beset by visions & nightmares & the ghost of Anne Boleyn.

Spencer follows the wokester narrative that white elitism is evil and rancid and needs to be resisted at all costs. Because Diana needs to breathe, love, live, talk to pheasants and save her sons from those toxic royal traditions and soul-smothering attitudes.

Time and again and through Diana’s eyes, we see the royal family as frigid monsters. I was actually thinking back to The Ruling Class (’72) and Peter O’Toole’s “Mad Jack” impressions of the House of Lords being filled with decaying corpses.

But it’s all one note with no real shifting of tone or pace, and is mostly about gowns and servants and crates of delicious food and vast lawns and the shooting of skeet and birds by fine gentlemen… it’s a fairly monotonous film, I’m telling you. It’s weirdly trippy but it just lies there. Really.

In a sense Spencer is the return of Pablo Larrain‘s Jackie — another meditative, interior dialogue–y, “woe is me because I’m drowning in sadness” thing.

Welcome to the kingdom of morose moods and impressions…Diana’s tears and bulimia and resentments and escape fantasies.

What a flat, one-note, boring-ass hallucinatory downer by way of a character study (or is it the other way around?).

I didn’t care about poor Diana’s anguish at all…she’s unhappy amidst all the opulence and regimentation? Tough shit, girl…get shut of it, shut it out, drop it like a bad habit, whatever.

Life is hard, Diana, but you romanced and maneuvered your way into the royal family, and I’m sure you’ll figure some way to divorce Charles and snag your $22 million settlement and handsome monthly expense check & so on…you’ll be fine.

”Please, Lord…I wanted to be Charles’ wife but now I feel stifled and unloved and unable to follow the usual, par-for-the-course protocols…I need to be free so I can order some KFC with the boys.”

Watching it felt like an eternity. I was shaking my head time and again. Nope, doesn’t work, “what?”, c’mon.

Why exactly is there a tender lesbian moment when Sally Hawkins’ maid tells Diana that she loves her? (In response to which Diana more or less goes “oh, wow!”). Arriving near the end of Act Three, Hawkins’ confession is a non-starter and therefore mystifying. Why even bring it up?

We’re told that Diana’s childhood home (Althorp House in Northhamptonshire) is walking distance from Sandringham House, the Queen’s grand Norfolk residence and the site of a 1991 Christmas celebration — the film’s central setting. Diana Spencer spent 15 or 20 years growing up in this region, and yet, according to the film’s opening scene, she gets lost trying to drive to Sandringham herself? Doesn’t make a bit of basic sense. (The residences are actually about 100 miles apart, or roughly a two-hour drive.)

The film is a psychological dreamscape and therefore not bound by history or geography, but why defy reality to this extent?

Plus the overly aggressive air-conditioning in the Galaxy was giving me pneumonia.

9.5 update (7:20 am): I posted an initial draft of this review in some haste yesterday afternoon. I’ve since given it a polish. 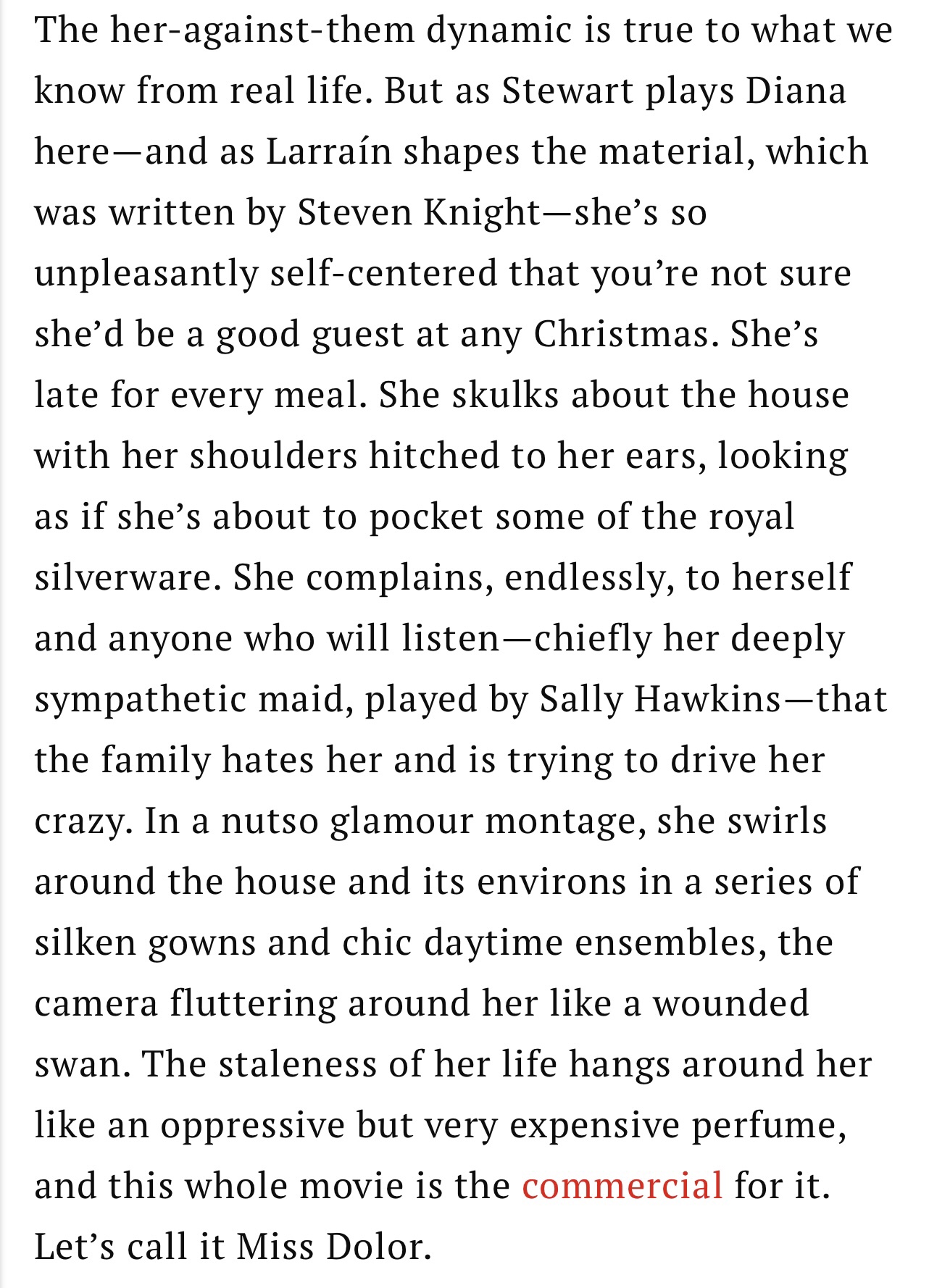