In the view of Variety‘s Todd McCarthy, Revolutionary Road is “constantly engrossing as it successfully engages the yearning of Frank and April Wheeler to rescue themselves from their decorous, socially acceptable oblivion, just as it clearly defines how the ‘trap’ is stronger than they are. The rows, tender moments and downtime in between are fully inhabited and powerfully charged by Leonardo DiCaprio and Kate Winslet. 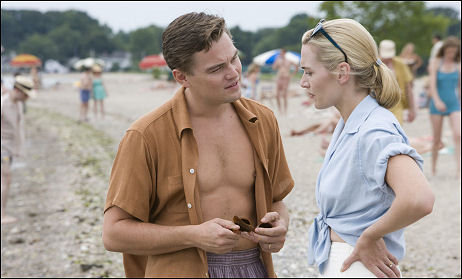 “For his part, DiCaprio often achieves the kind of double register the film as a whole less consistently captures, as he indicates Frank’s thought process in the split second before he decides what to say. At certain moments, the conjoined cerebral and emotional aspects of his characterization summon the spirit of Jack Nicholson‘s breakthrough performances around the time of Five Easy Pieces.

“Winslet’s perf is less surprising, perhaps, if only because she has shown tremendous range throughout her career. April is a difficult role in that her mood changes sometimes seem inexplicable, but the thesp makes them all seem genuine, which resonates with Frank’s occasional hints that she’s possibly in need of psychiatric help. Winslet’s starkly etched April is steely, strong and brittle, capable of great highs and lows as well as massive uncertainty.

“Pic’s startling supporting turn comes from Michael Shannon, who’s mesmerizing as the clinically insane son of local realtor and busybody Helen Givings (Kathy Bates). He’s a loony who is able to tell the truth about the Wheelers that everyone else so politely avoids; when Shannon is onscreen, it’s impossible to watch anyone else.”