DiCaprio at the Du Cap

Myself and maybe nine or ten other journalists were driven out to the Hotel du Cap at 11:45 this morning for some brief cabana sit-downs with Leonardo DiCaprio,the producer, co-writer and narrator of a down-to-it doc about global poisoning and not just global warming (which the film only focuses on for only 7 minutes) called 11th Hour (Warner Independent, October), as well as co-directors Nadia Conners and Leila Conners Petersen. 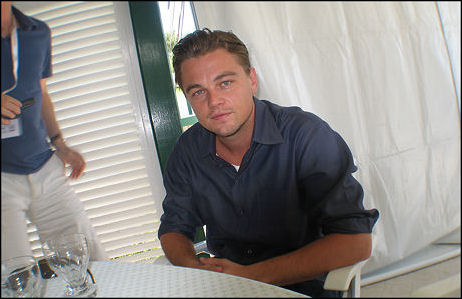 11th Hour producer-narrator Leonardo DiCaprio at the conclusion of today’s Hotel du Cap round-table interview, which took place in an airy bungalow a stone’s throw from the rocky coast of the beautiful Mediterranean — Saturday, 5.19.07, 1:45 pm

Two 11th Hour talking heads also participated — David W. Orr, an envirornmental issues authority and a professor of environmental studies and politics at Oberlin College, and Kenny Asubel, founder and co-executive director of Bioneers, a nonprofit outfit that focuses on solutions for restoring imperiled ecosystems.
Here‘s a recording of our group’s chat with DiCaprio and Orr.
The general consensus among the journos is that Michael Moore‘s Sicko is a more engaging and persuasive piece of agitprop than 11th Hour, which offers a very dense and thorough assessment of how we’re fucking the planet every which way, but at the same time is a little too crammed with information.
There’s no argument at all from this corner about the alarming things it says (and shows) about what amounts to a kind of mass global suicide, but it’s a movie, and the fact is that it doesn’t breathe and engage the way a piece like this should. After 20 minutes or so it makes you feel like you’re being hammered. It needs to pull back and relax and…I don’t know, throw in some jokes or something. A little more heart and soul and meditation.
11th Hour has exactly one laugh moment — a quote from Winston Churchill that says Americans “always do the right thing…unfortunately they only do the right thing after exhausting every last wrong possibility.” Or words to that effect. 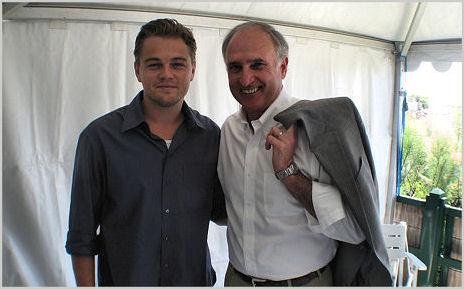 I hate saying this about a film I respect and that I want people to absorb for the content alone, but you can’t expect well-honed information and slam-bang visuals alone to do the trick. A movie needs to generate human warmth and aroma…some kind of emotional connection that really sinks in. As it is now, 11th Hour is too dry and didactic, and it doesn’t even try to generate the amiable personality that An Inconvenient Truth had by way of the reborn Al Gore.
But it won’t open until the fall so there’s obviously time for some re-shoots and touch-ups. Leo, Nadia and Leila should consider what I’m saying here. I’m not the only one, trust me.