“To be honest, of all the things I had to consider making the movie — the story, the characters, the actors — the hardest thing for me was the action sequences. There’s only so much left that you can do with action. I think we’ve done a good job, but I really had to rack my brains to try to think of something fresh.” — Live Free or Die Hard director Len Wiseman speaking to USA Today‘s Scott Bowles. 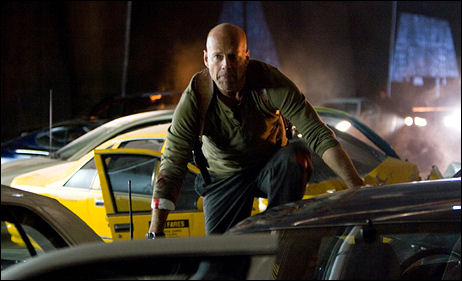 One tactic Wiseman decided upon, according to Bowles, was to quadruple up on the explosions. “Just about everything blows up in Live Free or Die Hard,” the piece observes. “Laptops. Fire extinguishers. Nerds’ apartments. But the fourth installment of the franchise (20th Century Fox, 6.27) comes at a time when audiences are yawning at things that go boom. And this summer hasn’t exactly been kind to spectacle.”

Wiseman also jacked things up with a few CG cartoon-y bits, to go by the trailer.

Another way to make action seem hot and breathless and super-cool (even though this too is starting to feel old) is to to use a lot of jerky hand-held footage and cut it all together at an almost too-fast rate.

I could have gone to the Live Free or Die Hard all-media screening in Westwood last night, but I felt it was more important to see another action flick that’s been getting good buzz. And this film (I can’t write about it just yet) definitely goes the jerky-fast route. And as far as it goes, it works pretty well. There are explosions in this new film also, but they’re relatively few so when they happen, they count.

I was particularly impressed by the action in the third act. Everyone will be; it’s the big selling point. There’s one action scene in particular that ups the ante on that scene in Phillip Noyce‘s Clear and Present Danger when Harrison Ford and a bunch of government guys are trapped and fired upon by gunmen on a small street. We’ve obviously seen it before (in “Grand Theft Auto” as well as on the big screen), but it’s good rock ‘n’ roll.

(Jesus H. Christ — I agreed not to write any kind of review of this film, and last night David Poland went up with a full-on review with all the trimmings. The movie I’ve been speaking of is Peter Berg‘s The Kingdom. Here’s how the game works these days: (1) The publicist says “see our movie, but please don’t review it yet,” (2) You say, “Thanks” and “okay, I won’t,” (3) The movie is screened and a competitor goes home and writes about it immediately, title and all, and (4) You call up the publicist and say, “What the…?”) 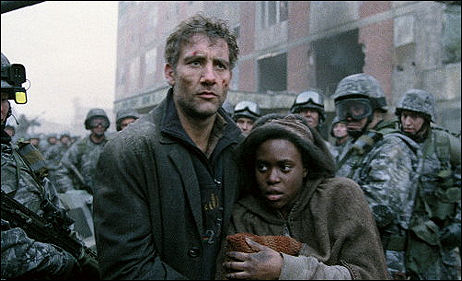 One thing Len Wiseman doesn’t seem to understand is that only one relatively recent action film has really and truly blown minds ands raised the bar: Alfonso Cuaron‘s Children of Men.

At no time did this landmark film make you feel as if the director and the cinematographer were trying to throttle your pulse rate with a torrent of explosions, whiplash photography and crazy machine-gun cutting. It made you feel as if you were there, neck deep in it, and it was all really and truly happening. It wasn’t invested in “action” as much as the reality around it, trusting the audience to absorb the fear on their own terms and to stay with the story as it moved along. Emmanuel Lubezki‘s photography was relatively smooth and continuous but without the cut-cut-cut — scenes went on for seven or eight minutes straight.

Aesthetically and technically, atmospheric “belief” is the new end-all and be-all in the action movie realm. Forcing it doesn’t really work any more. The more it seems as if the director is trying to work you over every which way, the less engaged and excited you’re going to feel. And the more that a director tries to really put you in the middle of a seemingly “realistic” situation — one that smacks of the real deal in dozens of different ways — and is also open to unpredictable and sometimes chaotic shifts, which is how any real-world action-and-death situation feels, the more you’re going to buy into it. For now.