Dignity Out The Window

Laments about the once-great Robert De Niro and Al Pacino having sold their souls for a series of straight-paycheck performances in a string of shitty films is an old tune ’round these parts. (I mentioned it in a recent item about De Niro’s humorous remarks at the Meryl Streep tribute, and in this March riff about the Righteous Kill trailer.) And now L.A. Times columnist Patrick Goldstein has jumped on the bandwagon. 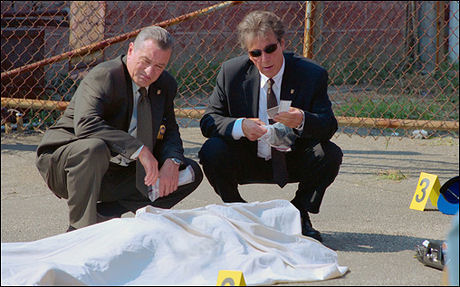 “[These] two icons of ’70s New Hollywood, heroes to a generation of young actors and filmmakers, have become parodies of themselves,” he writes, “making payday movies and turning in performances that are hollow echoes of the electrically charged work they did in such films as Serpico, Dog Day Afternoon, Mean Streets and Taxi Driver.
“I don’t envy Pacino or De Niro. They’re in a bind, having come of age at a time when actors could still get provocative dramas made without everyone having to work for peanuts. Today they’re grumpy old men, relegated to raking in loot from cartoonish comedy and generic thrillers.”