Creating and maintaining an elaborate deception is always stressful. And since this is the main activity in Ron Howard‘s The Dilemma (Universal, 1.14), sitting through it makes you feel whipped and shagged. It’s a bear. And it’s not especially funny. Okay, some at my screening were chortling from time to time, but at no time did anyone let go with quaking convulsive laughter. Which obviously suggests something about the engine under the hood.

It suggests that the spectacle of Vince Vaughn continually lying to the two most important people in his life — i.e., his best friend and business partner (Steve James) and his live-in girlfriend (Jennifer Connelly) whom he’s about to propose to — is not only unfunny but repulsive.

Allen Loeb‘s Dilemma script, which I’ve written about twice (earlier this month and last February ), is about Vaughn getting all sweaty and anxious about whether or not to share some devastating news with James about his wife (Winona Ryder ) boning some tattooed, not-terribly-bright stud muffin (Channing Tatum). Should Vaughn risk upsetting James, who’s not exactly a model of emotional stability and is under pressure to deliver a prototype of an electric muscle car, or forget about butting in and let sleeping dogs lie? He splits himself between the latter and former path, but mainly he lies. Mainly out of fear. (Which is to say an absence of character.) And then he decides to stonewall Connelly besides. Spread it around.

Like I said, a few were guffawing here and there. But why? What exactly is so funny about lying to people you care about? Laughter is usually about recognition and release of suppressed feeling, so those who laughed during my screening were presumably saying to themselves, “Hah! That’s the way it is, all right. And Vaughn is so good at exposing our sad foibles!” Which is basically a way of saying “that’s me, all right…lying my ass off and digging myself into a deeper and deeper hole and risk losing the trust of people I care about the most. I do this all the time….hilarious!”

I know all about the classic character arc known as the Three D’s — desire, deception, discovery. This is the basic underpinning of two classic Billy Wilder films, Some Like It Hot (’59) and The Apartment (’60). The main character wants something, decides that deception is necessary in order to attain it, and then realizes he/she can no longer lie due some fundamental recognition of the limits of his/her own moral behavior. It’s a classic and proven formula, but Howard and Loeb’s application doesn’t work. Because, I believe, Vaughn’s deception is truly pathetic and alienating. Only an asswipe would behave this way. 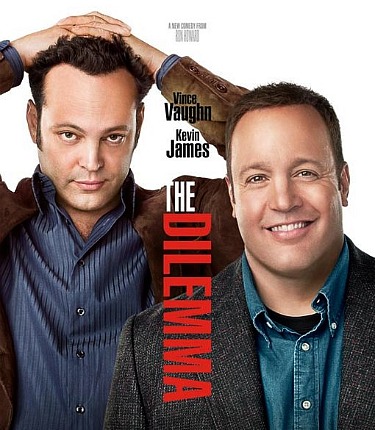 11 months ago I wrote that there’s only one thing to do in such a situation. Vaughn’s loyalty would be to James, not Ryder, and so one way or the other he’d have to share what he suspects. No right guy would have to think about this. He’d start out by stressing to his pal that he doesn’t really ‘know’ anything but that he’s seen something disturbing and that maybe something’s up and maybe not. And then he’d suggest that the friend might want to hire a shamus to learn the facts or whatever. But come what may you must share what you’ve seen and/or suspect.

I also had credibility issues with the idea of two whale-sized guys hooked up with ladies who look like they eat nothing but apples and tangerines. Yes, this happens in real life, but relatively rarely. The birds-of-a-feather syndrome. And make no mistake — Vaughn these days looks like like Keith Olbermann after a three-month cheeseburger and milk-shake diet, and James looks like he’s on the verge of a heart attack. I’m trying to show restraint in my argument, but my experience is that only the wealthiest and funniest fat men on the planet have super-slim girlfriends or wives, and even when this happens the wife-girlfriend will usually gain weight as a bonding/sympathy gesture. (Guys do this also when their wives get pregnant.)

So yes, I realize this is a hang-up of mine, but I kept saying “fat, fat, fat, fat, fat…look at those guys!” all through it. James is apparently a lost cause but what’s Vaughn’s issue? He was rail thin when he starred in Swingers 14 years ago, and now he looks like a wrestler.