Italian-born film producer Dino de Laurentiis — a famously vulgar schlock tycoon in the grubby-mitts tradition of Carlo Ponti, Sam Spiegel and Sir Lew Grade — has passed at the age of 91. He was a serious big-shot in his heyday, but De Laurentiis didn’t produce movies as much as finance them. He was one of those slick operators who saw films as product rather than vessels of entertainment or, perish the thought, a mixture of entertainment and art. 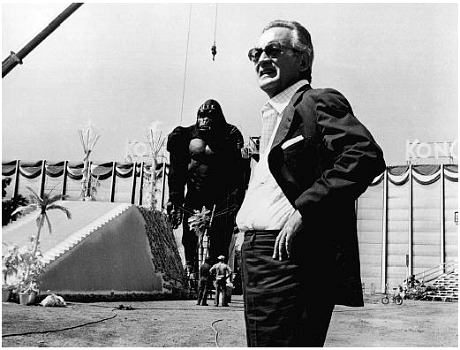 De Laurentiis financed a run of half-decent films in the ’70s and ’80s, but was primarily known as a primitive showman. His philosophy was basically that of a wheeler-dealer. He was the kind of guy who was always talking deals, territories, packages, int’l grosses, etc. And he never seemed to really accept or believe in the faith of Film Catholicism.

He was always the colorful swaggering Dino, the short guy with the expensive duds and the limousines and the arm-candy women and the almost comically thick tomato-sauce Italian accent. He became infamous in the mid ’70s for ostensibly saying on the Today show that John Guillermin‘s King Kong (’76), which Dino produced, was about “thees beeg monkey.”

De Laurentiis nonetheless financed (or co-financed) Serpico, Death Wish, Three Days of the Condor, The Shootist, The Serpent’s Egg, Ragtime, Blue Velvet and Manhunter — not bad. And he deserves respect for having co-produced Federico Fellini‘s La Strada and Nights of Cabiria in the mid ’50s.

De Laurentiis was born near Naples in 1919, and was called Torre Annunziata during his youth, and grew up “selling spaghetti produced by his father.” He never really stopped doing this, in a sense. All his life he “made” — financed — lowest-common-denominator spaghetti-popcorn films in order to make money and parade around so he could get more money so he could finance more lowest-common-denominator spaghetti-popcorn films. Except for the half-decent ones, I mean.

De Laurentiis and Ponti founded a certain flamboyant-hustle approach to producing (i.e, international pre-sales, funny-money, three-card monte, etc.) that was later adopted by Menahem Golan, Yoram Globus, Philippe Martinez, Elie Samaha, Giancarlo Peretti, Jean-Marie Messier, Bob Yari and Avi Lerner. None of these guys were ever known for looking at scripts or reading coverage even, and they never seemed to really get into the joy and awe and music of movies the way ambitious Scott Rudin-type producers do. 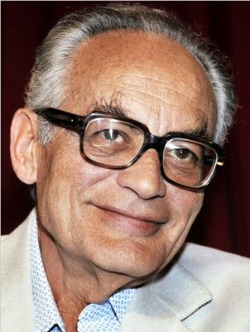 Dino De Laurentiis during a Cannes Film Festival tribute in 1984.

The late Sterling Hayden once told me a story about De Laurentiis that happened in the mid ’70s. Dino had given him a copy of Lorenzo Semple, Jr.‘s script of Hurricane, in hopes that Hayden would agree to costar. When De Laurentiis asked what he thought, Hayden said, “I gotta tell ya — I think it’s crap!” De Laurentiis replied, “You’re the first person who’s said that!” A day or two later Hayden talked to a De Laurentiis development guy who said, “Naahh…you’re not the first.”

De Laurentiis produced not one but two dreadful King Kong films. He produced the half-decent Barabbas with Anthony Quinn. He nearly killed Richard Harris‘s career with Orca (’77). He sometimes produced rank embarassments like Hurricane (’79). And he didn’t have the smarts or the instinct to get in on producing The Silence of the Lambs, but once that Jonathan Demme film became a hit he got into the Hannibal Lecter business big-time — Hannibal (’01), Red Dragon (’02 — a remake of Manhunter) and Hannibal Rising (’07), an origin story.