Disney’s decision to buy Marvel (i.e., hundreds upon hundreds of Marvel-created characters and storylines) for $4 billion is such glorious news that I can’t stand it. The identity of the corporate entity that will henceforth be free to exploit the Marvel elements is a huge thing for me personally. Well, not really, but I’m sure it’s a big deal for millions of Marvel fans worldwide. Okay, maybe not. 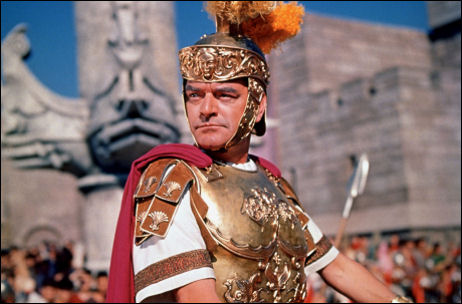 The only angle of any interest is whether or not this will serve to bland down the Marvel brand and take things in a kind of corporate Mickey Mouse direction. Wouldn’t this give Disney the force to veto any edge-pushing content from future Marvel character and creations? What’s the last genuinely cool and edgy film to come out of Disney culture? Would Iron Man have been the same film if Disney had been pulling the strings?

Transferring ownership of a major brand from corporate entity A to corporate entity B is a meaningless thing. All 21st Century entertainment corporations are invested in selling the same basic heroin. And make no mistake — Marvel mythology is in the business of pushing opiates to the masses. No clear light can come of this, and I will not go “hoo! hoo!” about this deal like all the other fansite monkeys out there. I will not wave and shout as Jack Hawkins‘ Quintus Arrius walks up the steps to greet George Relph‘s Tiberius Ceasar.