From the comment thread about last night’s “Bourdain Deepfake Isn’t A Problem“:

PartTimeHero: “Jesus Christ…people are actually upset about this? They were Anthony Bourdain‘s own verified words. Let’s not get too ‘woke’ on documentary filmmakers or you are going to have to accept the equal and opposite: that a documentary in theory is not far off from the makers of Jersey Shore or Survivor cobbling together their own storylines from footage.”

Mr. F.: “All they had to do was say it wasn’t an actual recording of Bourdain and they would have been fine. I just don’t understand the need to make it “his” voice. It’s the aural equivalent of putting a deepfake into a documentary, yet I suspect that would cross a line for you.”

Jeffrey Wells to Mr. F.: “Putting a visual deepfake into a documentary? Yes, that would be unacceptable. But there’s nothing wrong with what Neville did. Nothing whatsoever. I agree that he should have copped to it in the closing credits.”

Mr. F. to Jeffrey Wells: “But it’s exactly the same thing. Say you want to include a scene in a documentary that the subject has described in a book, interview, whatever — but there was never a video recording. You have the technology to shoot an actor doing what the subject says they did, then deepfake the footage to put the subject’s face on the actor’s body. While one is a visual recreation and the other an audio recreation: they are the same thing.”

Jeffrey Wells to Mr. F.: “Wrong. The key situation facing Neville was how to best aurally represent what Bourdain had written.

“Documentarians never resort to just showing passages that have been written — they ALWAYS have somebody read them. So the question was should Neville have (a) hired an actor to imitate Bourdain, or (b) read the passages himself (like Scorsese did in his Dylan doc) or (c) digitally replicate Bourdain’s voice?

“The key thing was representing Bourdain’s thoughts accurately and scrupulously. HOW they were read is a secondary issue. I have no problem with a deepfake Bourdain voice reading them, and why should you? Nobody’s lying or misrepresenting. It was simply a matter of what kind of voice would read Bourdain’s thoughts — the voice of an imitator, the voice of a neutral party (like Neville’s) or the simulated voice of Bourdain.

“If a Bourdain-imitating actor had read the passages in question, nobody would have said boo.

“Yes, there should have been a closing credit acknowledgment of this strategy, but otherwise it was obviously no biggie.” 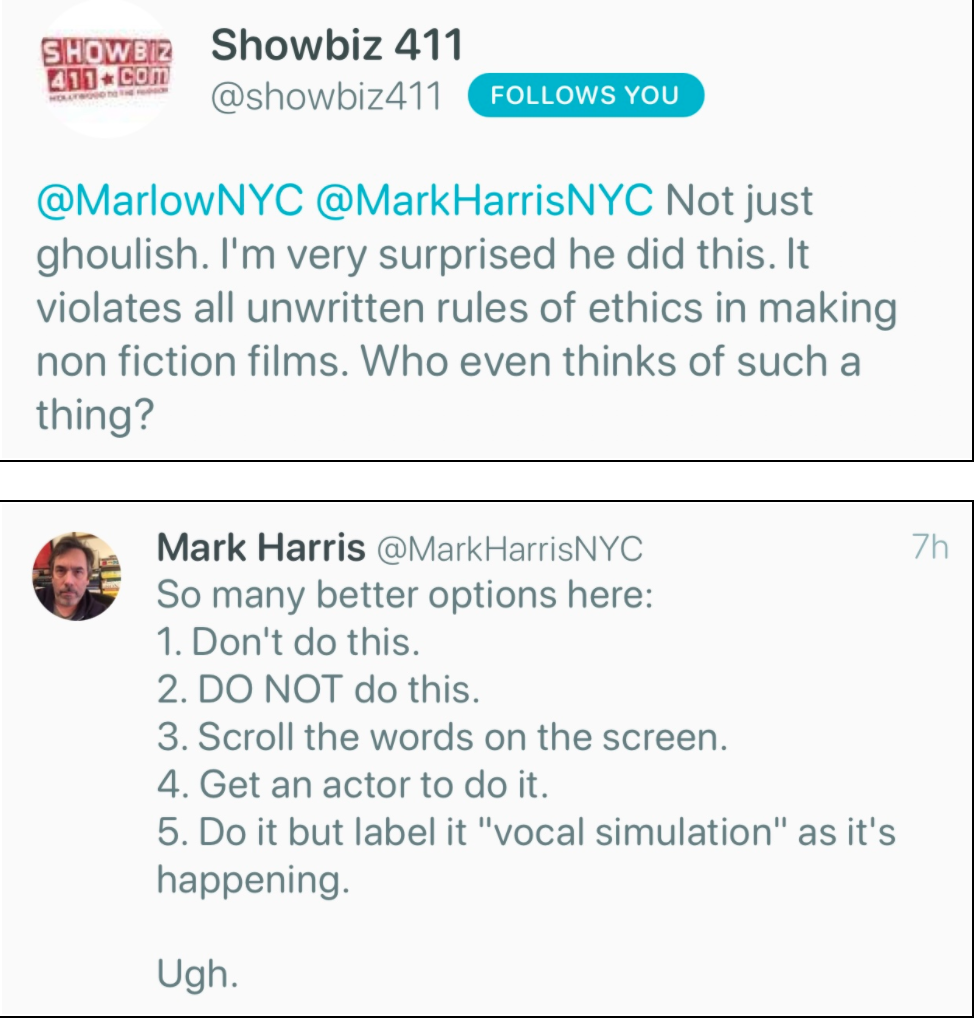