HE to director-writer pally: “They don’t care how shitty his films are? Okay, the first two thirds of Baby Driver works, but have you seen Last Night in Soho? Once you get past the concept and the 1966 time-trip design, it’s really awful. Stupid, crude, ham-fisted, tedious, repetitive.”

Director-writer pally: “Edgar is a really nice, engaging, genteel person and every comedy executive, especially in TV and streaming, hold him in messianic esteem. He’s Teflon — even Scott Pilgrim tanking didn’t harm his rep, and is now viewed as some sort of classic. The mantra from his fans is ‘he’s one of us.’

HE to director-writer pally: “Yes, Wright is very likable and personable, very easy to chat with, a good bullshitter. I’ve listened to Edgar in interviews. He talks a good game.

“Unfortunately, his movies (the first two-thirds of Baby Driver aside) are awful to sit through. So things like taste, clever plotting, refinement, dialogue that makes sense, cinematic coherence, directorial finesse…none of that stuff matters to these guys, you’re saying? Because Scott Pilgrim vs. The World s one of the worst films I’ve ever seen IN MY LIFE.”

Scott Pilgrim vs. The World is “not a perfect movie — the ending is rushed, and the serialized graphic novel doesn’t lend itself well to a three-act structure,” Cinemablend‘s Katey Rich reports from Comic-Con.

“[And] it probably won’t fly with older critics” — cranky-heads burdened with cinematic standards, she means — “[because] it’s too shallow, too silly, too obsessed with pop culture references to mean anything on its own. But I suspect anyone young enough to grow up with video games will feel an instant connection. 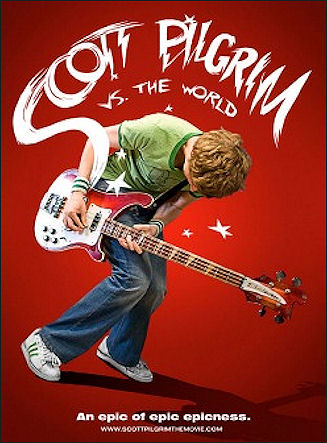 HE comment: “Indeed — the mantra and meme of all Comic-Cons now and forever is ‘insular.’ That insularity is welcome to itself, of course, and accessible to all comers, but what kind of thumbs-up review (which this is) basically says ‘see this movie as long as you’re willing to man up and take a risk, which you won’t actually regard as a risk if you’re young enough and wear shorts and dorky-looking sneakers with no socks and have had your narrative vistas defined by video games and graphic novels‘?

“Scott Pilgrim Wake-Up,” posted on 5.31.10: “Edgar Wright (Shaun of the Dead, Hot Fuzz) is obviously a nervy, fairly bright and moderately gifted director — seriously, no jive — and Scott Pilgrim vs. The World, even though it seems to be putting out a kind of aesthetic nerve gas, is some kind of cool-ass, smarty-pants, richly stylized…uhm, waste of time?

“It’s kind of nifty if you want to feel connected to a movie that under-30 moviegoers are responding to. It’s empty and strained and regimented, but…you know, cool and funny and clever, heh-heh. It has wit and vigor and smart music, and it gradually makes you want to run outside and take an elevator to the top of a tall building and jump off.

“Did I just say that? I mean that it’s a masterpiece of its kind. That sounds facile, doesn’t it? I think I might actually mean that Scott Pilgrim is a seminal and semi-vital thing to experience right now. My kids set me straight on this. Call me unstable or impressionable but I’ve also come to think that Michael Cera might be a fresh permutation of a new kind of messianic Movie God — a candy-assed Gary Cooper for the 21st Century.

“No, seriously, it’s not too bad. I mean, you know…just kill me.

“I was sustained, at times, by the meaning of the seven ex-boyfriends. They’re metaphors for the bad or unresolved stuff in Mary Elizabeth Winstead‘s life. If you’re going to really love and care for someone, you have to accept and try to deal with everything in their heads and their pasts, and not just the intoxicating easy stuff. Scott has to defeat these guys in the same way that any boyfriend or husband has to defeat or at least quell the disturbances in his girlfriend’s or wife’s head. That’s how I took it, at least.

“I didn’t want to kill myself while watching Scott Pilgrim vs The World. That impulse came later.

“It’s just that I know if movies are in fact going to be moving more and more in the direction of Scott Pilgrim in the coming years — video-game inspirations, glib dialogue, wimpy girlymen in lead roles, bullshit video-game fight scenes, laid-back gay guys engaged in threesomes in shitty basement apartments — then I really would rather die. Because movies as I’ve known them all my life would in fact be dead, and there’d be nothing to live for.

“Then again I really liked the music that Scott’s band plays. It throbs and churns with a wowser bass line — not at all like the gay music my two sons seem to prefer these days. And I liked Kieran Culkin, who plays Scott’s gay roommate, and at the same time I wanted to see him cut in half (or into several pieces) with a chainsaw. And I liked the little lovesick Asian girl (Ellen Wong) who has a crush on Scott, and I despised Scott for not being able to summon the puny amount of courage it would have taken to simply lay it on the line and tell her he’s fallen in love with someone else. But…you know, as Scott says early on, “That’s haaaaard.” What a guy.”