Strangely, oddly, curiously, I didn’t hate Get Smart. I wouldn’t have felt very good if I’d paid to see it, but it’s mildly amusing (emphasis on the “m” word) here and there. I was expecting it to be awful and it’s not. It is, however, a little dreary to sit through. Okay, more than a little. But despite the depressing atmosphere of surrender to corporate attitude and authorship in every corner of it, Steve Carell‘s Maxwell Smart is half-appealing. He half-creates his own guy and half-channels Don Adams. 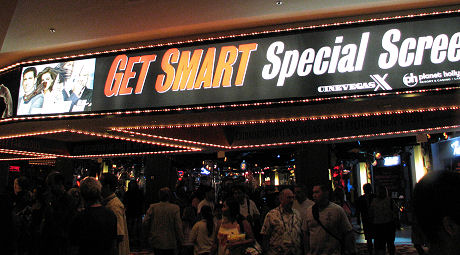 I know what it’s like to feel horribly burned by a bad big-studio film, and Get Smart did not do this to me. I wasn’t in the least bit engaged or turned on and I didn’t laugh out loud once — but I didn’t despise it.

I vaguely hated myself for sitting there and watching it this afternoon, but I have to be honest and report that the audience laughed a lot and clapped at the end. Nobody near me as I was walking out was putting it down. They knew it was basically a nothing movie, but they didn’t seem to mind. Whatever…we’re on vacation! I’ll tap out a bit morethis evening, but I have to get to a Cinevegas movie that’s starting 35 minutes from now.