Don't Dweeb On Me

The remaining winners of Los Angeles Film Critics Association 2010 awards have been announced, and there’s another head-scratcher to ponder — Kim Hye-ja, star of the Brian De Palma-like South Korean potboiler Mother, has been handed their Best Actress award. 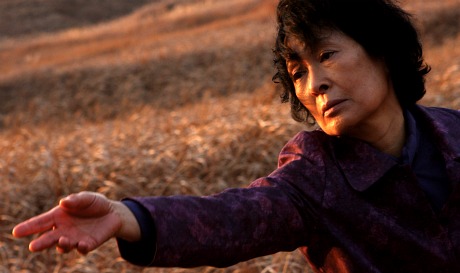 This is “interesting” and outside the safety zone in a cool way, I suppose. But it also seems like a deliberate provocation to the status quo for the sake of deliberately provoking the status quo. I saw Mother at Cannes ’09 — neither it nor Kim Hey-Ja’s performance were anything to have major kittens over. She’s fine in a broadly theatrical, suffering-drama-queen way, but c’mon.

LAFCA has a oddballish reputation to uphold, I realize, but you just know they were saying to themselves “why do we have to fall in line for Natalie Portman?…let’s go with somebody fringe!”