We’ve all read about the similarities (or at least the comparisons) between David Fincher‘s The Curious Case of Benjamin Button and Robert Zemeckis‘ Forrest Gump. The lifespan story of an oddball guy with an unusual but charmed condition, following him from childhood to maturity and all around the mulberry bush. And both films written, of course, by Eric Roth. 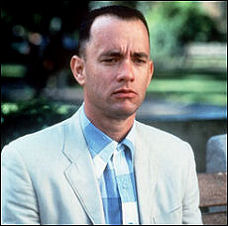 But I’d prefer not to go there because of my still-lingering resentment of the Zemeckis film, which I and many others disliked from the get-go for the way it kept saying “keep your head down,” for its celebration of clueless serendipity and simpleton-ism, and particularly for the propagandistic way it portrayed ’60s-era counter-culture types and in fact that whole convulsive period.

Every secondary hippie or protestor character in that film was a selfish loutish asshole and every man and woman in the military was modest, decent and considerate. These and other aspects convinced me that the film was basically reactionary Republican horseshit, and led me to write an L.A. Times Syndicate piece called “Gump vs. Grumps,” about the Forrest Gump backlash. So I’d rather not consider it alongside whatever Benjamin Button may or may not be offering. No offense to Roth, who’s a good fellow and a brilliant writer.