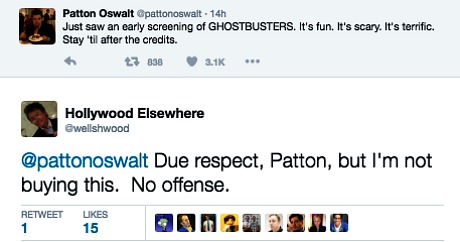 All right, here’s why:  99 times out of 100 “talent” tends to support “talent” when it comes to sharing views about newish, just-seen films. An actor or actress will always turn the other cheek. They’ll never tweet something along the lines of “just saw Ghostbusters…save your money.” I admire Patton for his perceptions on almost all topics, but I must take his opinions of new movies and particularly comedies with a grain of salt. And it doesn’t matter if you say “due respect” and “no offense” — the twitter bitches will still want your head on a stake for not being obsequious enough.