No Mincing of Words

David Poland‘s amusing response to Tom Ford‘s A Single Man went up four days ago, but I was running around too much to settle in and counter-riff. I laughed because in an exceptionally refined and immaculate and gourmet-ish way it has been filmed, in a manner of speaking, in “Gay-O-Vision.” 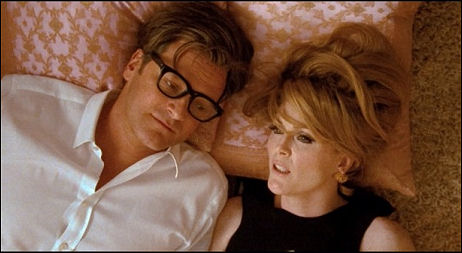 I briefly described A Single Man during my Toronto frenzy as lulling and haunting and reminiscent of Michaelangelo Antonioni‘s Red Desert (and even L’eclisse in a certin way) and undeniably enhanced by Colin Firth‘s quietly moving lead performance. But let’s face it — it’s mainly going to be seen by the hoi polloi as a somewhat fashion-maggy, gay-friendly film, even though most fair-minded viewers, gay or straight, would say on their way out to the parking lot that it amounts to more than that.

I found myself flirting with the idea of “Gay-O-Vision” being used to cleverly promote A Single Man in the same way that “No wire hangers!” was used for Mommie Dearest. Of course, this would suggest a campy element that the film doesn’t deliver in the slightest way.

The emotional tone of this serenely beautiful film is sadly meditative and solemn, but there’s also no denying that the supporting guys — Matthew Goode and especially Nicholas Hoult — are deliciously attractive, even from a militantly straight perspective. (Not to mention whomever plays that model-pretty guy from Madrid.)

Poland disparaged this element, calling the movie “good, but self aware to the point of what will be comedy for some audiences. It’s practically made in Gay-O-Vision, with the most beautiful men on the planet, Julianne Moore as The Ultimate Fag Hag (beautiful, drunk, and desperate to sleep with our gay hero because she no longer can deal with the idiocy and ungroomed hair of straight men), and even a color scheme change to signal the audience that sexual arousal is occurring.

“I admit, if this was a straight story and the star was Harrison Ford or Kevin Coster or Richard Jenkins, it would be a different, more commercial animal. But it never would have been shot like a J Crew catalog shoot where the stylist forgot to bring the clothes.

“Thing is,” Poland concludes, “that is Ford’s accomplishment. He has made a pretty movie of a tiny, fragile story, and it works. In many ways, it is the gay Precious…a ghetto film, but [rendered as] the most beautiful ghetto ever. It will play great on wide screens in retail stores with no sound. And I would be afraid that this was an insult, except I also feel that this is exactly what the filmmaker intended on this one.”