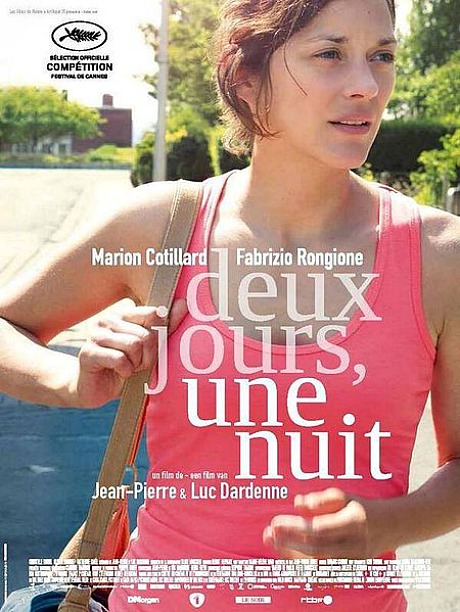 Cotillard plays a depressed, Xanax-taking wife and mother who’s trying to stay psychologically and emotionally afloat after learning that she’s being laid off by management fuckers. (Her company makes solar panels.) But there’s a chance to save her job if she can convince nine or ten co-workers to vote for her re-instatement on Monday morning by secret ballot. This seems in doubt as a vote for Cotillard will result in each co-worker forfeiting a bonus of a thousand euros that’s been promised by the top dog. On top of which the unstable Cotillard is susceptible to periodic bouts of lethargy. Half the time she wants to give up.

Boiled down, Two Days, One Night is about a series of weekend conversations in which Cotillard asks this and that co-worker for their support. Her life is on the line — her home, her children’s welfare, her somewhat shaky marriage — but she doesn’t get down on her knees and beg. She holds on to her dignity but she doesn’t mince words either — she and her family are looking at a very trying situation if she loses her job. A certain number agree to support her but others are regretfully unable to help, they say — they need the dough for this or that. A couple of guys are openly hostile to her. One weak supporter is afraid that management will find out that he’s voted in her favor and perhaps punish him for that.

The bottom line is that the movie is almost entirely about medium shots of people talking. With the exception of a couple of brief physical conflict scenes and a mobile musical sing-along or two, it’s all done in moderation. The film delivers a somewhat unexpected ending with a certain ethical/moralistic finale that I agree with (i.e., it sends the right message), but I don’t think this makes the film an especially strong or profound work. The best I can say about Two Days, One Night is that (a) it’s cinematically sufficient but no great shakes, and (b) its values are ones that I share and support. I don’t know what else I’m supposed to say. I know that I won’t be strong-armed into submitting to the Dardennes by soft-pedaling my reactions.