I’m cutting out around noon to go up to a Kirk Douglas black-tie tribute thing that the Santa Barbara Film Festival crew is throwing for him in Goleta (just west of Santa Barbara). I’ll be gone for the remainder of the day, so no burning the wick to the bottom and back to the skillet first thing manana. 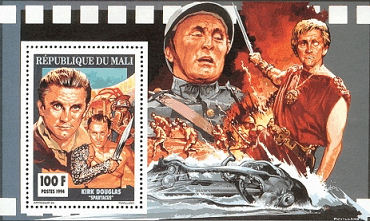 In 1982 I flew from Manhattan to Laredo, Texas, to do a Douglas interview on the set of Eddie Macon’s Run for the New York Post. I’d hit it off pretty well with Douglas a few weeks earlier at a press get-together at Elaine’s, in part because I went on and on about how much I admired Lonely Are The Brave, and this vein continued in Laredo. I knew every one of his films and could quote dialogue from a fair number of them. “You’ve really done your homework,” Douglas told me at one point.
His work on Macon ended that day and he offered me a lift back to Houston in a small private jet, during which time I heard all kinds of great stories (including some amusing particulars about Henry Kissinger‘s closed-door exploits in the early ’70s). I spoke with Douglas a couple more times after that, and sat next to him at a Manhattan performance of “The Man” which his son Eric (who died in July 2004 after a fairly turbulent life) was starring in. We met a year and a half later at some swanky event at L.A.’s Century Plaza and I had the distinct impression that Douglas didn’t remember much from our day in Laredo. Celebrities are like that. He’ll be 90 years old this December, and a friend who spoke to him not long ago says mentally he’s still sharp as tack.