The old Siskel and Ebert movie-review show was the first to teach hoi polloi film lovers that “the argument was the thing — that art itself was arguable, and that was okay,” Chicago Tribune guy Christopher Borelli said today. 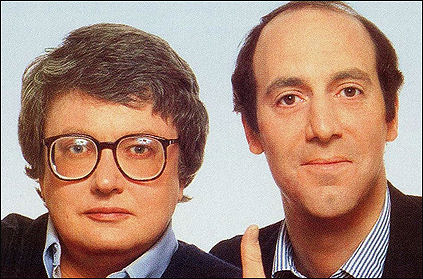 “Ebert still writes dazzling reviews for the Sun-Times that make complicated points in approachable language, as does [Michael] Phillips, for the Tribune. Richard Roeper continues as a Sun-Times columnist. And there are more than a few thoughtful voices left in criticism, of course — outside Chicago, even.
“But it’s hard to overstate the importance of a nationally syndicated TV show that speaks up for small fine movies without marketing budgets and reinforces names such as Werner Herzog, Robert Altman and Spike Lee and, oh, say, a David Gordon Green. Indeed, it wouldn’t be an overstatement to say that for a generation or two of moviegoers, it was Siskel and Ebert who introduced the idea that good criticism is not about finality or consensus or putting your thumb up or down.
“It’s about argument itself.
“The irony, of course, is that it wasn’t so long ago that Ebert and Siskel themselves and those opposing critical digits were often raised as the primary catalyst in the dumbing down of film criticism. But I bet for the average everyday moviegoers who rarely think beyond ‘I liked it’ or ‘I hated it’ and who rarely consider aesthetics or polemics or politics when they go to a multiplex, the end of the original incarnation of At the Movies will feel like the finale of film criticism itself.
“The argument has ended. The informed movie review can be placed officially on the endangered species list. On TV, let’s just declare it extinct.”