Drillbit Taylor is, sorry to say, a stiff. This is surprising given that Judd Apatow produced and the great Seth Rogen co-wrote it. (The fact that Little Nicky‘s Stephen Brill directed means nothing either way.) I wasn’t so much bummed by it as, like, deflated. It’s tedious. And almost never funny. And dull. And I’m trying to be even-toned here.

It’s the usually amusing and resourceful Owen Wilson, a guy I almost always enjoy to some degree, spinning his wheels with some really weak material about a pathetic loser acting like one and doing little else until the very end. It’s a really good film to take breaks from. Hit the head, make phone calls, do squat thrusts in the lobby, flirt with the candy girl.
On top of Forgetting Sarah Marshall, another Apatow comedy that I’ve yet to review but which I felt kind of badly about, this is probably the beginning of a temporary downgrade in the brand. It’ll be restored in August with Pineapple Express, and it may be turn out that Marshall will do okay commercially. But the notion of the Apatow seal being some kind of dependable assurance of a rollicking good time is, for now, out the window.
Drillbit Taylor is about three high-school nerds — Nate Hartley (smart, bespectacled, rail-thin)), Troy Gentile (obese, smart) and David Dorfman (tiny, dorky, braces) — who hire a full-of-shit homeless guy (Wilson) to protect them from a couple of psychotic bullies who humiliate and beat up on them all the time. My knee was vibrating like a jackhammmer ten minutes after it began. 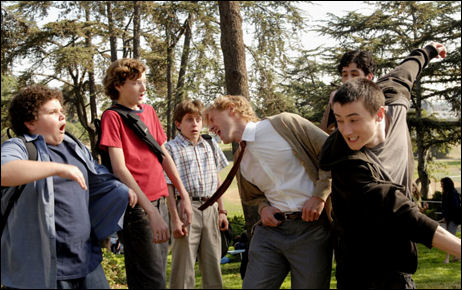 The two thugs (Alex Frost, Josh Peck) are awful in every sense. They’ve been written without a hint of humanity or dimension. They’re just assholes — sadistic thugs who make life miserable for the nerd guys (and the audience) because…no clue, no nothin’. I felt like I was sitting though a Crown International youth comedy from the ’80s. I just sat there thinking about my life and about stuff I had to do when I left the theatre. I realized that I’d lost my wallet on the way over. I thought a lot about which files I needed to put on my external hard drive.
Wilson’s unshaven jerkoff has no redeeming characteristics at all, and there’s no escape. He can’t even fight. He puts the kids through a kind of boot-camp training and promises to bitch-slap the two sadists, but he shilly-shallies when push comes to shove. He’s just interested in the kids’ money and agrees to a plan to steal stuff from their parents’ homes with two loser-asshole friends.
You know going in that Wilson will have grow a conscience and do the right thing in Act Three. And that the bully dickheads will eventually be slapped down and taught a lesson. And that you’ll come of this movie feeling really, really bad.