I saw Martin Scorsese‘s The Wolf of Wall Street (Paramount, 12.25) for the second time last night, and it felt just as wild and manic as it did the first time. (And without an ounce of fat — it’s very tightly constructed.) And yet it’s a highly moral film…mostly. Scorsese, Leonardo DiCaprio, Jonah Hill and all the rest are never really “in the room” with these depraved Stratton Oakmont brokers. They’re obviously juiced with the spirit of play-acting and pumping the film up and revving their engines, but each and every scene has an invisible subtitle that says “do you see get what kind of sick diseased fucks these guys were?…do you understand that Jordan Belfort‘s exploits redefined the term ‘asshole’ for all time?” 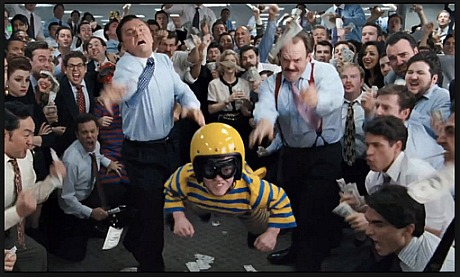 Why, then, did I say that Wolf is “mostly” moral? Because there’s a subcurrent that revels in the bacchanalian exploits of Belfort and his homies. It broadly satirizes Roman-orgy behavior while winking at it. (Or half-winking.) Unlike the Queens-residing goombahs in Goodfellas, whom he obviously feels a mixed affection for, Scorsese clearly doesn’t like or relate to the Stratton Oakmont guys. But the 71 year-old director also knows first-hand how enjoyable drug-abuse can be for cocky Type-A personalities in groups, and he conveys this in spades. Wolf is clearly “personal” for Scorsese. Like everyone else who came of age in the ’60s and ’70s, he is believed to have “indulged” to some extent. (Whatever the truth of it, 1977’s New York, New York has long been regarded as a huge cocaine movie.) One presumes that Scorsese is living a sensible and relatively healthy life these days, but boy, does he remember!

And it hit me last night that The Wolf of Wall Street is going to be enjoyed by audiences as a rollicking memory-lane drug party. Anyone who lived any kind of Caligula-type life in their late teens and 20s is going to get off on it. Because as deplorable and outrageous as the film’s party behavior seems, it’s also oddly infectious.

I saw Wolf with critics the first time, but last night’s screening played to a more mixed crowd and they were howling at times, trust me. Losing it, laughing hard. Were they absorbing what Scorsese and DiCaprio were really saying? Sure, of course, but I could sense that they were getting tingly contact highs. For The Wolf of Wall Street takes you back to your wildly irresponsible carousing days, allows you to laugh uproariously at the dumb (and perhaps reprehensible) things you did and have probably forgotten about, and then sets you free when it’s over.

And yet for older, stodgier types who never went there in their teens or 20s or did and are determined to keep those memories in a locked box (or for those who can’t handle the crude sexual exploitation of women, which has always been a nocturnal characteristic of arrogant Wall Street types), Wolf is going to be seen as an ugly three-hour romp and nothing more. It’s not judgmental enough, Belfort is too much of a prick, what’s the point of this? and so on.

This is why I’m calling The Wolf of Wall Street the new Scarface. It has so far been shat upon in certain quarters by the same kind of harumphy industry crowd that despised Brian DePalma‘s 1983 crime pic. And just as Scarface eventually became a cult flick (especially among “urban” rapper/hip-hop types who idolized gangsta culture and the swagger of Al Pacino‘s Tony Montana) it’s probably going to be embraced by (a) present-day party animals and by (b) 40- and 50-somethings those who remember their druggy days and want to enjoy them once again by proxy — a three-hour tour.

The Scarface Wiki page interprets the film’s reception as follows: “According to AMC’s ‘DVD TV: Much More Movie’ airing, Cher loved it [but] Lucille Ball, who came with her family, hated it because of the graphic violence and language, and Dustin Hoffman was said to have fallen asleep. Writers Kurt Vonnegut and John Irving were among those who allegedly walked out in disgust after the notorious chainsaw scene. At the middle of the film, Martin Scorsese turned to Steven Bauer and told him, ‘You guys are great but be prepared, because they’re going to hate it in Hollywood…because it’s about them.’

“Leonard Maltin was among those critics who held a negative opinion of Scarface,” the page says. “He gave the film 1 1/2 stars out of four, stating that ‘…[Scarface] wallows in excess and unpleasantness for nearly three hours, and offers no new insights except that crime doesn’t pay.’ In later editions of his annual movie guide, Maltin included an addendum to his review stating his surprise with the film’s newfound popularity as a cult-classic.”

This is why The Wolf of Wall Street is the only truly bold and nervy film in the Best Picture circle right now. It’s both appalling and gutsy as hell — a wild-ass moralistic “comedy.” It’s clearly condemning Belfort’s behavior and yet…

Confession: I used to recreate with drugs (pot, hallucinogens, opiates) in my 20s. On top of which I had a vodka problem in the early to mid ’90s, and I had an alcoholic dad who passed along a good amount of emotional misery before joining AA in the mid ’70s. So I know a little something about substance-abuse pitfalls. Addiction is the banshee that could have taken me to hell but shrugged and gave me a ‘get out of jail’ card instead. I was spared, grew past it, whatever…and yet there but for the grace of God.

The Wolf of Wall Street reminded me of the “farewell, my dignity” aspect of drug abuse. Constant assaults on your self-esteem, stains on your soul, humiliations unbridled. One way or another, if you do drugs you’re going to be dragged down and made to feel like a low-life animal. Because that’s what you are as long as you let drugs run the show.

I’m going to leave aside discussions of my Godhead Siddhartha discoveries with LSD, and I’d just as soon forget my relatively brief encounters with blithering idiot marching powder from the late ’70s to mid ’80s.