Sasha Stone and I met last evening around 6:15 pm at the Albuquerque airport’s baggage retrieval area. But the car rental took longer to figure out than expected plus we experienced a 40-minute wipeout due to missing the 550 north turnoff. So we didn’t really get going until 7:40 pm. But we arrived in Durango, Colorado around 11 pm, and that was with a 20-minute Subway stop. We dropped our bags at the Siesta Motel, and then hit a local bar and drank hard stuff. 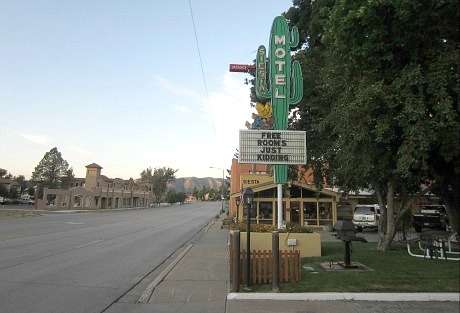 A young female bartender told us about two Durango-to-Telluride routes — the standard way through Dolores and up the winding 145, and a more scenic way by driving up to Silverton “and then you go to Ouray.” I couldn’t quite hear with the bar noise and all, but I mostly heard the “aaay!” sound. A town? A cousin of Uday Hussein’s? “Oorraay! You go to Oorraay!”

I checked this morning with Glenn Zoller, a longtime Telluride Film Festival visitor, and he said “that’s bullshit…that way you have to go all the way up to Ridgeway and wrap all the way around…if you’re on a motorcyle and you have all the time in the world, great…but it takes forever.”

The Telluride Film Festival lineup will be revealed sometime around noon or so. I’ll try to announce the big surprises, if any, via Twitter. Twitchfilm posted a rumor last night about Carnage and Tinker Tailor Soldier Spy being part of the lineup. Nobody knows anything, but I’m told this is absolute bullshit and that neither of these films will play here.

“George Clooney is here,” Zoller reports. “And Ralph Lauren‘s son” — Andrew Lauren — “is getting married Sunday to George Bush‘s niece” — model Lauren Bush — “up at Lauren’s Double RL Ranch, between here and Ridgeway. From what I hear George Bush and Bill Clinton are attending.”