Yesterday (9.29) Widescreen‘s Anthony Francis posted on Facebook about some of his favorite death scenes. What follows are my reactions to some of these as well as a reposting of “Son of Brando Death Bubbles,” a riff about Marlon’s death scene at the end of The Young Lions (’58).

1. Marlon Brando‘s hacking cough death in Act Three of The Godfather (’72). Francis comment: “The man dies a monster — a mirror image of his true self.” HE comment: Vito Corleone does not “die as a monster” but as a kindly, animated old guy playing with his grandson. The scene in which Vito scares young Anthony by putting a piece of orange skin in his mouth is one of the most heartwarming moments in American cinema. That and the heart-to-heart scene with Al Pacino (“Wasn’t enough time, Michael”) is why Brando won the Oscar.

2. Christopher Walken shoots himself in the head in The Deer Hunter (’78). Francis comment: “One shot and with a smile, [Walken] becomes another casualty of war.” HE comment: I hated Cimino’s idiotic Russian roulette gimmick from the get-go, and have always refused to read anything into it. No lead character in a serious film has ever died for a dumber reason than Walken did in The Deer Hunter. Which I haven’t seen, by the way, since ’78 or thereabouts.”

3. John Hurt chest-burst death in Alien (’79). Francis comment: “The death that shocked audiences all over the world.” HE comment: Well, okay but people weren’t reacting to Hurt’s death as much as the realistic physical effects that made the chest-fever scene seem so vivid and traumatic. It wasn’t a death thing but a ‘holy shit, how did they do that?'”

4. Rutger Hauer‘s wings-of-a-dove death scene in Blade Runner (’82). Francis comment: “All those moments will be lost in time like tears…in the rain. Time…to die.” HE comment: “One of the saddest, gentlest and most beautiful death scenes in movie history.”

5. Josh Brolin‘s off-screen death in No Country For Old Men (’07). HE comment: “One of the strangest directorial cheats of all time…almost on a fuck-you level…you spend a whole film with a guy and then he gets blown away by some crazy Mexicans and we don’t get to witness it in real time?”

6. James Cagney‘s blown-to-kingdom-come death in Raoul Walsh‘s White Heat (’49). HE comment: “Better to go out with a big glorious bang than whimpering and anesthetized inside some padded cell.”

7. A lovesick, house-sized ape plummets 86 stories to his death in King Kong (’33). HE comment: “20 or 30 seconds before he lets go and falls there’s an expression on Kong’s face as he looks up at the planes. The look says “you fucking assholes…I’m in love and all you want to do is kill me…you’re such pricks, all of you…why didn’t you just leave me alone with Faye Wray back on the island? I would’ve taken care of her.”

8. Each and every electric-chair death in The Green Mile elicits HE contempt. As God is my witness I’ll never see that godawful film again.

9. William Holden‘s pointless and easily avoidable death in Sunset Boulevard. HE comment: Joe Gillis knows that Norma Desmond tends to react over-dramatically about everything, and he knows that she’s obsessively in love with him, and that the odds of her doing something rash if he announces he’s leaving her are high. If Gillis was smart he’d play it cool, leave her a sensible note, take the nice wardrobe and escape while she’s sleeping. And then go to the cops and say, “There’s an eccentric wealthy woman who may do something violent.”

“Just shy of three years ago I posted a video capture of Marlon Brando‘s air-bubble death scene in Edward Dmytryk‘s The Young Lions. For over a decade I’ve been calling this the most ingenious use of water and oxygen to convey the dying of the light, bar none. No other screen actor had gone there before or has gone there since, at least to my knowledge.

“The sane and reasonable Barack Obama was president during the initial posting. At the time only a small community of rightwing loons were taking the presidential candidacy of Donald Trump as a half-serious proposition. Why am I mentioning this? Because Trump announced his candidacy on the same day that I posted “Bluray Brando Bubbles.”

“Brando’s Christian Diestl is in a forest not far from a recently liberated concentration camp, sick of war and madly bashing his rifle against a tree. Then he runs down a hillside and right into the path of Dean Martin‘s Michael Whiteacre and Montgomery Clift‘s Noah Ackerman. Ignoring the fact that Diestl is unarmed, Whiteacre fires several bullets and Diestl tumbles down the hill. He lands near a shallow stream and then splashes into it, face down. 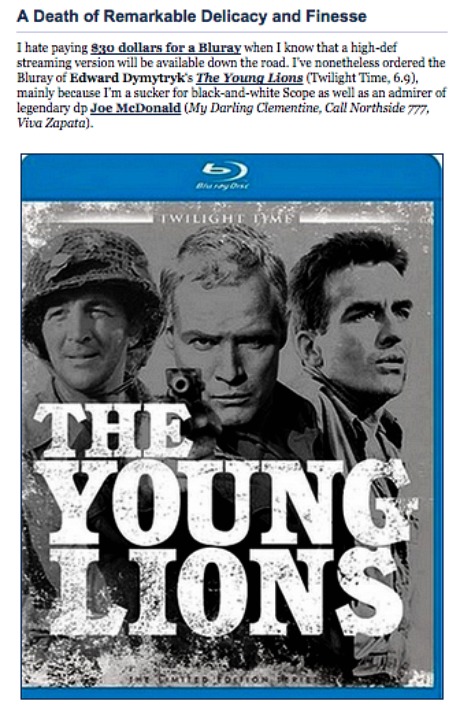